Lenovo is back with another smart home device: the Yoga Smart Tab with Google Assistant. This product looks like a tablet, but with some extra features you won’t find on an ordinary slate. The device packs Google Assistant, as its name suggests, and it can function as a smart display — one that includes a nifty built-in hinged kickstand that enables users to literally hang the tablet from a nail or hook. Is the Yoga Smart Tab better than a dedicated smart display? Read on to find out.

The Yoga Smart Tab resembles a tablet in every way except one: it has a massive, rounded edge that houses the unique kickstand and two JBL stereo speakers. This edge looks cumbersome at first glance, but you’ll quickly discover that it is very ergonomic; having this large rounded portion as a grip is very comfortable when using the device as a tablet. Most importantly, however, the kickstand makes it possible to hang the tablet anywhere you can install a hook or nail. 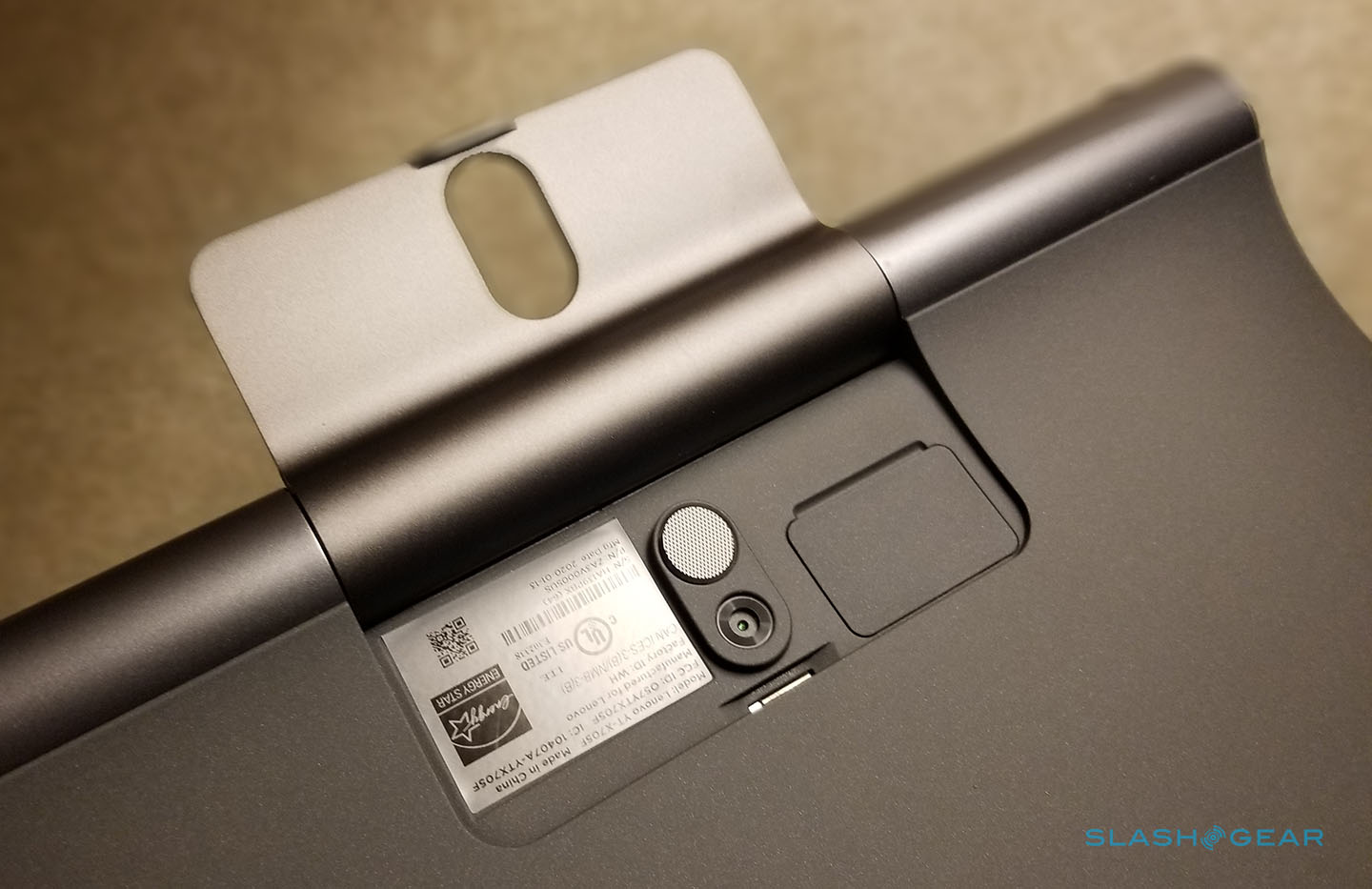 If you sometimes use the tablet in the kitchen — let’s say while you’re cooking in order to scroll through recipes or watch tutorials — you can quickly flip out the stand and hang the tablet on the wall, then retrieve it when you’re finished. The hinge is very solid and tight, meaning you won’t be able to easily knock it over or into the wrong position. 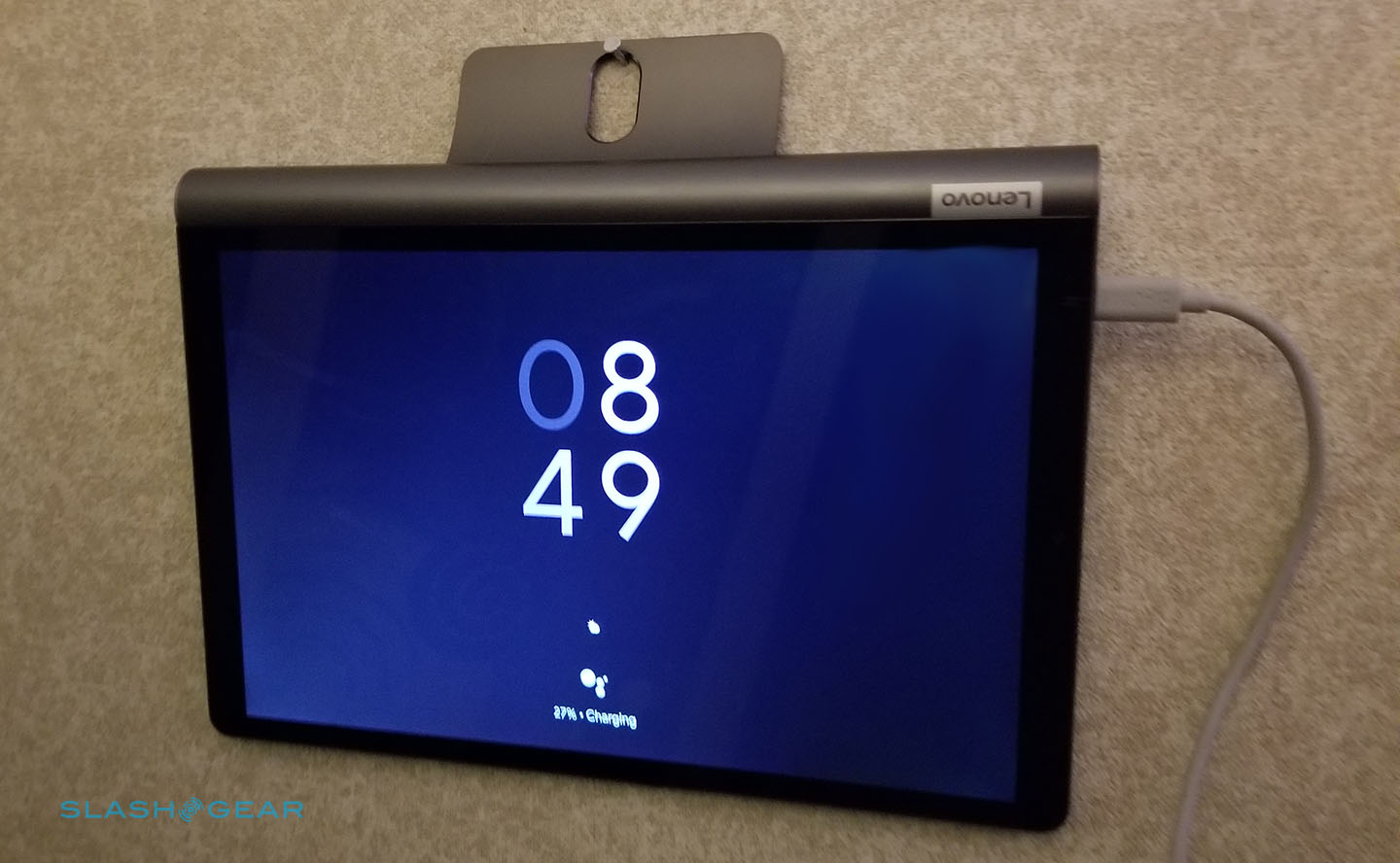 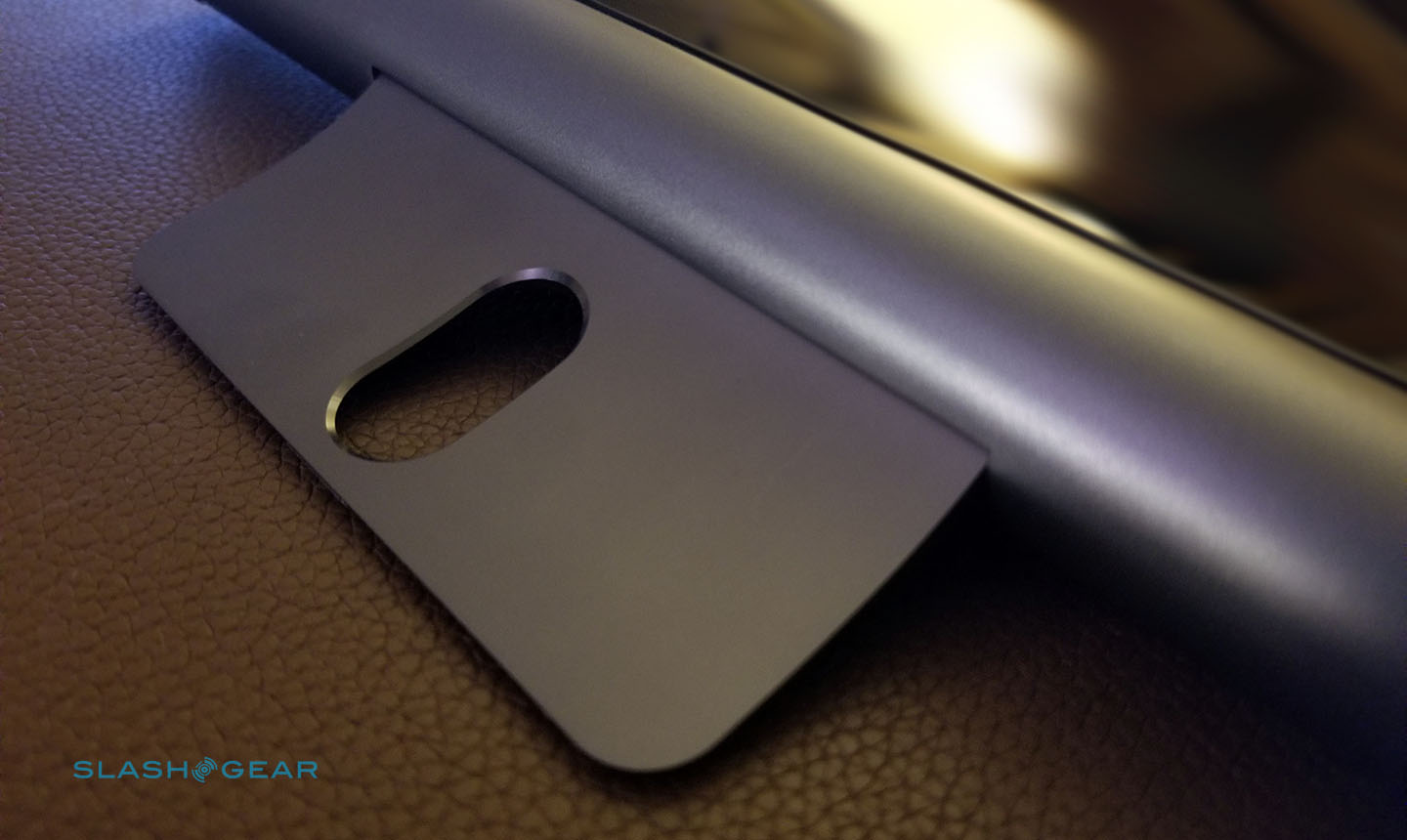 When the tablet is hanging on a wall, it does bounce slightly as you tap the screen; you’d need to put an adhesive strip or something similar behind it to keep it fixed in place, but that would eliminate the option to randomly grab it off the wall and use it as a regular tablet. With that said, the bouncing is minor and doesn’t impact the use of the tablet as a stationary smart display.

Of course, the display can also be placed in a third-party stand for a more stable, long-term mounting solution that doesn’t involve a wall. There is a benefit to having the tablet hanging from a hook, however, and it’s that the audio bounces off the wall and is directed back at the user. This can also have the effect of making the audio a bit flatter, so it all comes down to how the tablet is used and the customer’s own preferences. 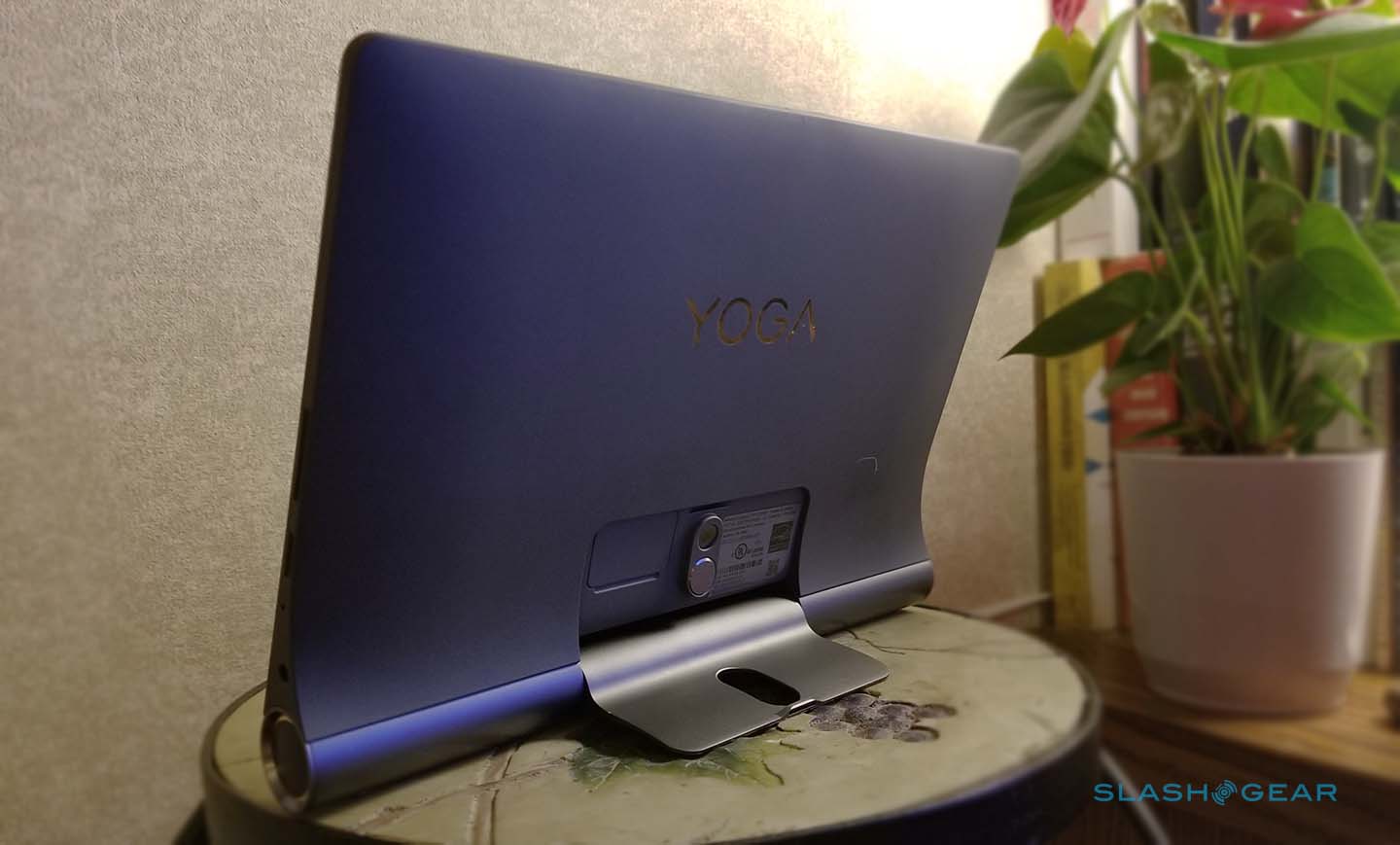 Users also have the option of positioning the tablet in a near-vertical arrangement using the built-in kickstand, but there is a downside to this: it is unstable and easy to knock over when simply tapping the screen if you’re not careful. A small bump will send the tablet to the ground, so a third-party display with better stability would be necessary if you have cats or kids.

In addition to the 10-inch display, the tablet features a pair of 2-watt JPL speakers alongside Dolby Atmos. The model also packs three digital microphones in addition to an 8-megapixel front-facing webcam with autofocus. These features make the Yoga Smart Tab a more effective smart display than an ordinary tablet, which is likely to have small, tinny speakers and a low-resolution front camera with poor image quality.

The Yoga Smart Tab with Google Assistant is a great tablet…when used as a smart display. When used as an actual tablet, the Smart Tab is very basic and only capable of simple tasks — streaming videos at sub-4K resolutions, listening to music, playing basic games like cards, chess, and bubble popping activities.

The tablet is not capable of handling more intensive tasks, however, and it can’t be used to play more demanding games. You certainly shouldn’t expect, for example, to play Fortnite or Call of Duty Mobile on this model.

The tablet is perfectly capable of handling Google Assistant’s Ambient Mode, which pulls up a simplified interface with access to smart home devices when the tablet is plugged in. The Ambient Mode disappears as soon as the tablet is unplugged, enabling the user to access the ordinary Android interface. I was able to use the Yoga Smart Tab to video chat, stream YouTube videos and music, check my email, control the smart lights, and pull up the security camera feed without any issues.

Certain activities, including multitasking, would cause the tablet to randomly freeze, sometimes for a very brief moment and other times for a few seconds. In a couple of instances, the display completely froze and I had to turn it off and then back on again to restore function. This worked every time, however, and the experience is what I have come to expect from lower-end Android tablets. At other times, something as simple as swiping to remove push notifications would result in multiple seconds of hesitation.

The audio quality is where the Yoga Smart Tab with Google Assistant shines. Though they’re obviously not going to compete with large dedicated speakers, the built-in JBL stereo speakers found on this tablet are capable of impressive audio quality that I’d put on par with what I get from the Google Home Mini. The quality is certainly adequate for a smart display/speaker experience, though it may be lackluster for streaming music.

Finally, the front-facing camera quality was adequate, though akin to what you’d get from a budget-tier smartphone. The wide-angle lens made it suitable for video calls, but the camera can’t be compared with the quality you’d get from higher-end smartphones.

There are a few things to like about this tablet, including:

– The audio quality is excellent for a tablet. The relatively large stereo speakers on this model separate it from other tablets, giving consumers who want a smart display a reason to choose this product over an ordinary cheap slate. Of course, this assumes you don’t plan to use the device with a larger, more powerful third-party speaker or wireless home audio system.

– The unique hinged kickstand makes it possible to hang the tablet from a hook or nail; the kickstand can also be used to prop up the tablet when typing on the display and to position it vertically as a smart display. The hinge’s build quality feels very solid, meaning you won’t have to worry about it folding in when you don’t want it to.

– The tablet’s design is visually appealing. The rounded edge is comfortable to hold for long periods of time, potentially making the tablet more appealing to people who enjoy reading ebooks.

The upsides come with some downsides. We encountered a few issues and concerns about the Yoga Smart Tab, including:

– Poor performance. As mentioned above, the tablet is prone to freezing or hesitating, which provides a poor user experience. At times, we experienced performance issues from something as simple as waiting too long to swipe away push notifications, allowing a dozen or more to build up.

– Poor webcam quality. If you’re planning to use the Yoga Smart Tab as a smart display, you’ll likely want to use it for video chatting. If that’s the case, you’re probably hoping for higher-end quality, which you won’t get from this model. The video quality is certainly adequate, but only adequate.

The Yoga Smart Tab with Google Assistant is a tablet designed to function as a smart display and it is decent at both tasks. Users get an atypically ergonomic experience due to the large rounded edge on the tablet, plus the built-in kickstand offers the unique opportunity to hang the tablet as if it were a picture frame. The built-in stereo speakers likewise offer something more than you’d get from the average tablet, equalling the experience you’d get from a small, portable Bluetooth speaker. 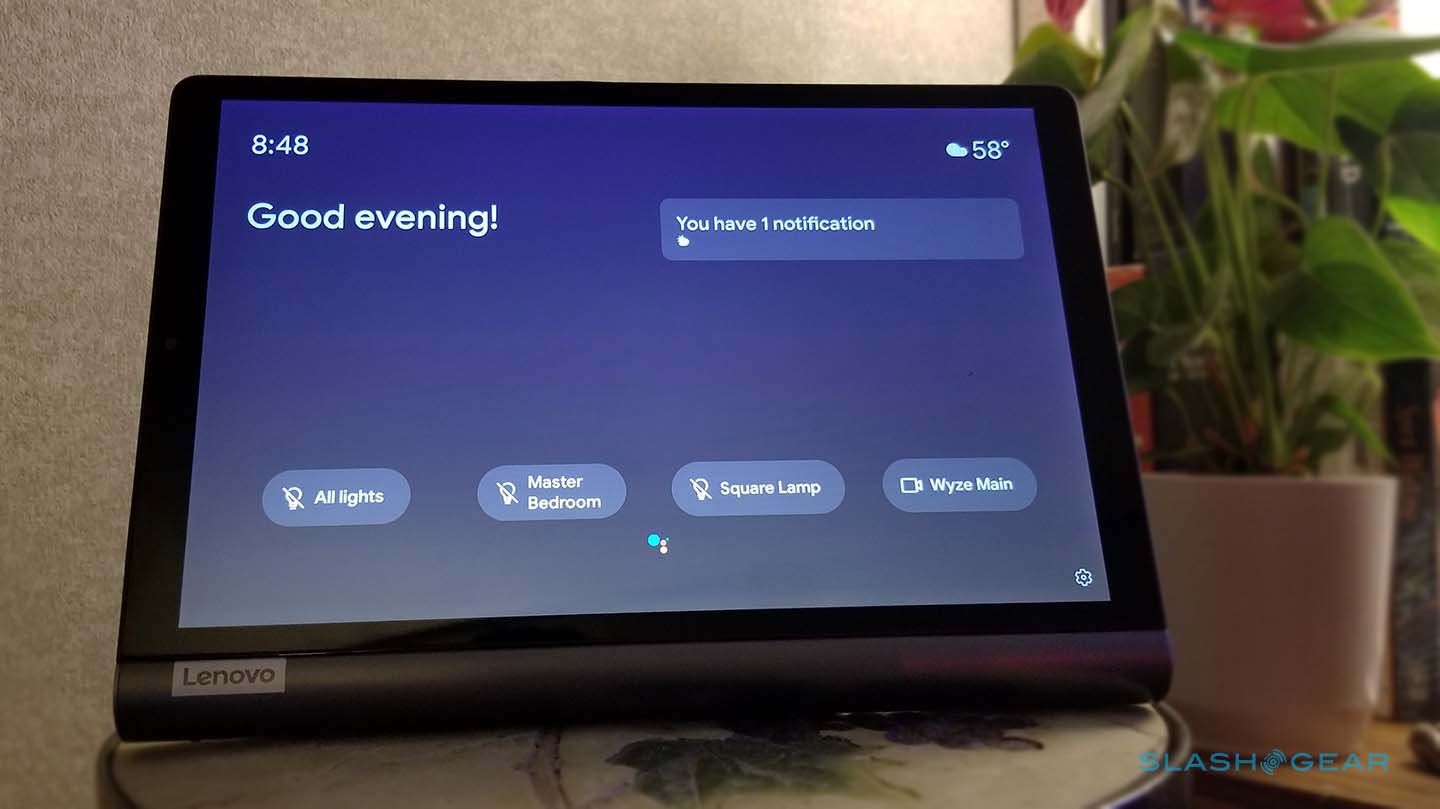 Unfortunately, that’s where the benefits end. With a price tag starting at $250, one would be right in expecting better performance from the tablet. A slate that struggles to handle a day’s worth of push notifications without freezing is hardly capable of meeting the daily media demands of most consumers. Consumers would likely be satisfied with the Yoga Smart Tab as a smart display, but it is overpriced for the job. Lenovo’s 10-inch Smart Display with Google Assistant, for example, has a starting price of only $150 USD.