The European Space Agency has confirmed that ice found on the comet 67P’s surface is water. Some parts of the comet have “significant” amounts of water ice, while other portions of the comet’s surface have lesser amounts. The confirmation comes a long while after Rosetta arrived at the comet in 2014 and observed ice a short while later.

Comet 67P’s main gas is water vapor, but that didn’t necessarily mean the ice was water. Most of the ice, according to researchers, originates from below the comet’s crust. Relatively speaking, exposed ice is in limited quantities. Researchers used Rosetta’s VIRTIS infrared tool to analyze the comet’s top layer and discern its composition. 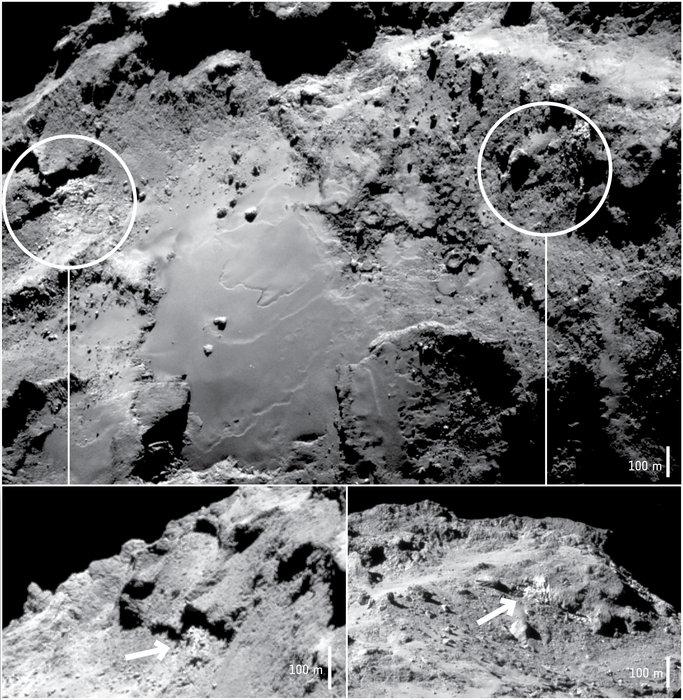 The ESA reports the comet’s upper layer is composed of “organic-rich material” that is dry and dark, and there’s water ice among it. The comet’s Imhotep region in particular features a pair of icy spots measuring “several tens of meters” across the surface. That ice, based on scans from September and November 2014, has been confirmed as water ice.

In addition, and using the scans, researchers have found two different ice grain sizes on the comet, with one measuring in at 2mm or so and the other with a diameter that is “several tens of micrometers” in size. When the scans were taken, the icy region had an average temperature of -202F.