Anyone who has ever tried to smack a fly that was annoying them knows how fast the little bugs can move and how agile they are. Scientists have been trying to create robots that can fly like insects and birds for a long time. A new flying robot has been created by researchers at TU Delft from the Micro Air Vehicle Laboratory (MAVLab).

The scientists there are experimenting with the first autonomous, free-flying, and agile robot that moves by flapping wings. The robot was developed specifically to improve the understanding of how fruit flies control aggressive escape maneuvers of the sort deployed to avoid your swatter. Study of these capabilities is an important step to creating insect-size robots that can both power and control fight using wings with the agility needed to operate in the real world.

The robot the team created can flap its wings 17 times per second to generate both lift and directional control using those wing motions. It’s able to do that by making minor adjustments to its wing motion while in flight. Those adjustments and rapid wing beating allow the robot to hover, fly in any direction, all while being very agile.

The top speed for the robot is 25 km/h and it can perform aggressive maneuvers such as 360-degree flips that are like loops and barrel rolls. The wingspan of the robot is 33cm and it weighs 29 grams. That size and weight give power efficiency allowing for five minutes of hovering flight and more than 1km of range on a fully charged battery. 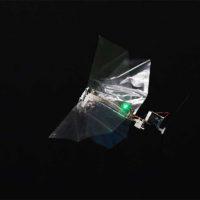 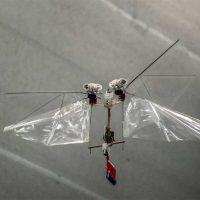 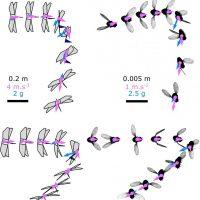 The bot is programmable making it suited to studying insect flight. Already the team has been able to program the robot to mimic the flight patterns of a fruit fly. Those patterns include the highly aggressive maneuvers that a fruit fly uses to escape being squished by a person with a fly swatter in hand. This bot will be developed further and already has a flight time to make it practical in real-world applications.