A researcher from the University of Richmond called Kelly Lambert has done something that sounds impossible outside of children’s books. She has taught a rat to drive a tiny car. Lambert is a professor of behavioral neuroscience, and she and her team taught the rats to drive.

The study housed some male rats in a complex, enriched environment that had interesting objects for them to interact with. Rats in that interesting environment were able to learn to drive a small car. Rats that were housed in a standard laboratory cage had problems learning the task of driving.

Lambert says that the results mean that the rats in a complex environment had more behavioral flexibility and neuroplasticity. The researchers called the vehicle an ROV or rodent operated vehicle. The rats were taught to drive in a forward direction and steer in more complex navigational patters. 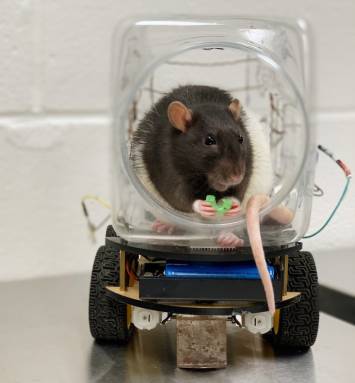 Compared to rats in standard housing, the rodents in the enriched house showed more robust learning in driving performance, and the interest in the ROV persisted through the trials. The team found via fecal analysis that DHEA/CORT metabolite ratios suggested that driving, regardless of housing group, enhanced makers of emotional resilience.

It appears in a video of the ROV in operation that the rats steered the vehicle towards food inside the enclosure. The researchers say that the research may help them in learning more about neurodegenerative diseases and psychiatric illnesses such as Parkinson’s and depression. It appears that the rats touched wires inside the ROV to control its direction.