Push notifications via Chrome are great, but complicate things a bit

Last week, Google updated Chrome to version 42 (beta). In that update, there was a small (possibly overlooked) feature that brings push notifications to your phone for websites than enable the feature. The update is part of Google’s Fizz initiative, which aims to bridge the wide gap between native mobile apps and web apps for mobile. That same update is creating a bit of buzz, but also confusing the matter of apps a bit, as push notifications for mobile websites are now available — just like native apps.

In a blog post today, Google is announcing they’ve already got partners pushing notifications via Chrome. Sites like Product Hunt or Pinterest will now shovel pop-up notifications to your lock screen or notification bar, all aimed to give you the same timely info a native app might.

Chrome 42 beta also makes it much easier to add a website shortcut to your home screen. The website slips an icon onto your phone’s screen, and once clicked, you’ll be redirected to that website. It’s not a new feature — just easier.

With icons and push notifications, Google is blurring lines for mobile and native apps, but could be creating confusion for users. Should you already have the native Pinterest app, you’d potentially end up with two icons on your screen; native and web.

There’s also no means to control duplicate notifications. Handy, the move asks that you make a choice between mobile and native, if one exists. Should your favorite site not have a native app, this becomes pretty handy. 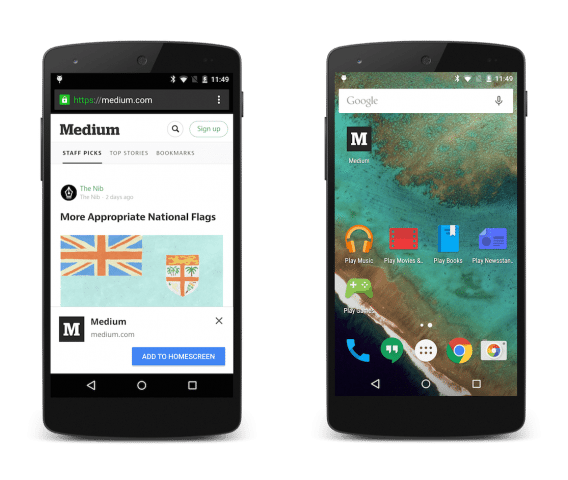 Discretion will be the better part of the mobile web should Google’s mobile web initiatives take hold, and there’s no reason to think they won’t. App icons remaining sticky and push notifications are two big pulls for native app development over a mobile-friendly website.

To that, Google is also readying a change to their search algorithm that will demote non-mobile-friendly sites. It’s a catch-all move; the site has to be mobile friendly to get ranked, and Chrome mobile is ready to make it more app-like. Clever.

This will also have a broad reach in emerging markets, where the web is set to dominate the landscape, at least for the immediate future. There’s also no clumsy app store to navigate to find apps. The Internet is your app store. Also clever.

The update is technically beta, which is positive. It needs work. Right now, there is no way to quiet the noise. All notifications are treated equally, so a new article on VICE will get the same treatment as someone on Pinterest pinning something new. You can’t get a ‘ping’ for VICE and a quiet background message for Pinterest.

But it’s also added bulk to a lumbering ship. Chrome is already pretty heavy; power and CPU consumptive. It’s definitely a performer, that Chrome browser, but man does it need a lot of fuel.

For now, it’s a forward-thinking approach form Google’s Chrome team. A good one, too. Google is still the only one using this push notification standard, so we’ll have time to see who follows them down the rabbit hole. More (like Mozilla and Safari) probably should, but not at the expense of native apps.

That will be the difficult part.