Purdue researchers set a record for the whitest paint ever

Researchers at Purdue University have landed in the latest edition of the Guinness World Records book for creating the whitest paint ever. Despite how cool it is to have a record in the iconic record book, that wasn’t the goal of the researchers when they set out on the project. What the researchers wanted to do was help curb global warming.

Professor of mechanical engineering Xiulin Ruan said when the project began seven years ago, the goal was saving energy and fighting climate change. Ruan invented the paint with help from graduate students to reflect sunlight away from a building. The properties that made the paint highly reflective also made it extremely white.

The paint can reflect 98.1 percent of solar radiation while emitting infrared heat. Since the paint absorbs less heat than it emits, the researchers say a surface coated with their paint would be cooled to a temperature below the surrounding environment without using electricity. The new paint is markedly different from typical white paint available commercially, which gets warmer rather than cooler.

Current paints designed for reflecting heat can reflect only 80 to 90 percent of sunlight and are unable to make surfaces cooler than their surroundings. According to the team, if the new paint were used to coat a roof area of about 1000 square feet, it would result in cooling power of up to 10 kilowatts. To put that 10-kilowatt number in perspective, that’s more cooling than air conditioners used in typical houses. 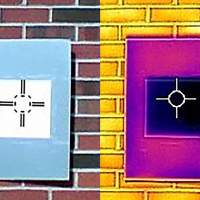 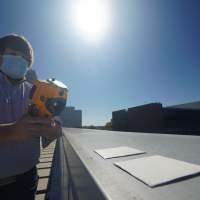 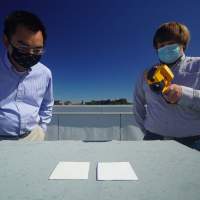 The team investigated more than 100 materials during the research before narrowing it down to 10 and testing 50 formulations of each of those materials. Two major features make the paint so white. One is a high concentration of barium sulfate, and the other is varied particle sizes for the barium sulfate in the paint. A wider range of particle sizes can reflect more sun. The team has applied for patents on their paint.