We’re not even halfway through April yet, and NASA’s already tantalizing us with some fascinating discoveries this month. The most recent one involves an “ice spider” on Pluto, a large part of the planet’s landscape featuring “an unusual geological feature” the space agency describes as looking like a big ol’ spider. A color image of the region was snapped by NASA’s New Horizons spacecraft last summer, and the photo has just recently been made public.

Of course, you can put your hopes and fears behind you — it’s not a real giant ice spider, but rather some seemingly cleverly arranged fissures in Pluto’s icy surface that form a shape resembling an arachnid. There are a total of six fractures fanned out that all come together at a single, somewhat rounded center point — despite how it seems on the screen, though, the area is not small.

According to NASA, the ‘icy spider’ has fractures that measure hundreds of miles in length, with the biggest being the deep groove dubbed “Sleipnir Fossa,” a 360+ mile stretch of broken land running approximately north-south on the planet. Contrasting that is the smallest of the six fractures, one facing east-west and measuring under 60 miles in length. 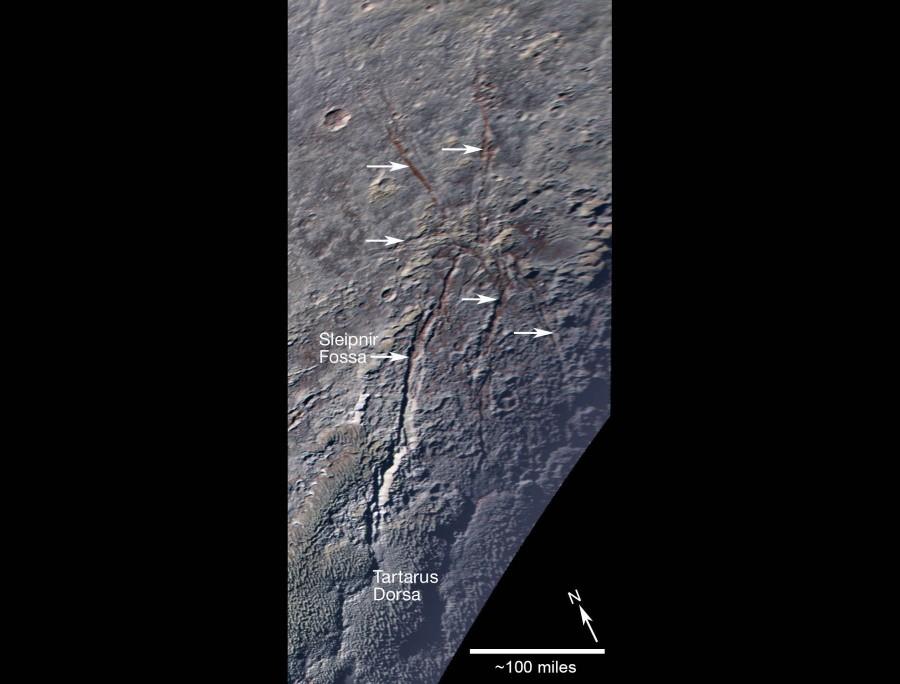 Each of these fractures meet within an area called Tartarus Dorsa, and the entire collection reveals some type of underlying red layer deeper under the planet’s surface. Why the unusual shape?

NASA researchers aren’t entirely sure, but say it is likely caused by “material welling up from under the surface” in the Tartarus Dorsa region, something that would cause the planet’s icy crust to crack and fracture in a radial pattern.

The image you see above was taken at about 21,100 miles above the planet, and represents about 2,230 feet per pixel, giving you an idea of the massive size. In relation to Pluto’s “heart,” the icy spider lies to the right side, and is only partially visible.