Pleurobot is a robotic salamander skeleton

Pleurobot isn’t supposed to look exactly like a salamander, it’s more like the skeleton was pulled out of one and decided that it was going to keep doing its thing. To design the robot the researchers watched a lot of 3D x-ray movies of real salamanders as they walked around and swam. The team tracked up to 64 points on the animal’s skeleton and recoded the bones in great detail. 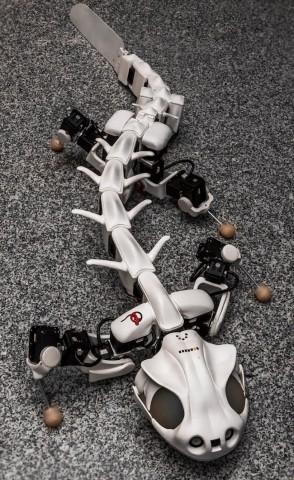 Using this technique, the team of designers recorded three postures for three different gaits they wanted their robot to mimic. Pleurobot has torque control for all of the active joints allowing it to apply neural network models of the spinal cord neural circuits of the salamander and activate virtual muscles to perform the movements of the real animal recorded in the x-ray movies.

That means all the joints and muscles in the Pleurobot move just like a real salamander. It’s rather creepy looking on the video, which you can see for yourself below. The robot is able to walk on land and swim underwater. The robot did need a waterproof swimsuit to go into the water.