PlayBook gets OS Update, Not the One We Were Waiting For

BlackBerry PlayBook owners can now update their Tablet OS to v1.0.5. This free over-the-air update was announced by RIM yesterday, and is the second update to BlackBerry’s new Tablet OS. The update included some needed features like the ability to charge your PlayBook while the device is powered down. The new features look like a good addition to the PlayBook, but this update does not include all the updates and fixes we would have liked to see.

The new OS comes preloaded with Facebook for easier uploading and sharing pictures and videos, message deletion, and other functionality. It also adds the BlackBerry Payment Service, which would allow users to make in-app purchases. This would allow a smooth process for purchase of in-game content like additional levels or weapons. Enhanced language support has been added for our International friends, this includes French, Italian, German, Spanish, Dutch and for our British friends even UK English. There is also new enhanced WiFi detection to make it easier to connect to a WiFi hotspot. The charging enhancements allow users to adjust screen brightness simply by touching the battery icon, and a warning will pop up if you accidentally plug in the wrong charger. 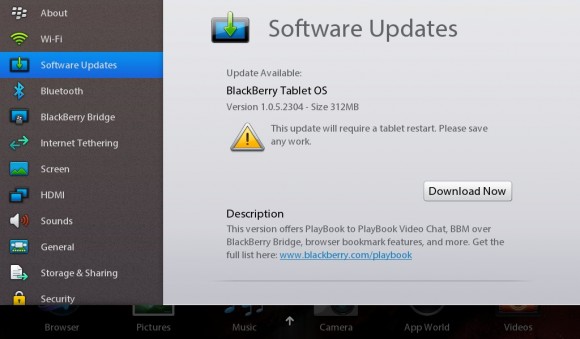 These additions and enhancements look great, but some of the main issues we have with the PlayBook still remain. Lack of Contacts, email, etc. Of course those are all available when tethered to a BlackBerry phone, but we don’t want to start beating a dead horse. Hopefully OS v1.0.6 will be released soon and it will also include compatibility for Android 2.2 Froyo apps.