The most over-hyped fight in a decade watched an aging Mayweather hold onto his undefeated record against Pacquiao, whose career is also on the wane. Outside the ring, another battle was being fought: Pay-Per-View vs. Periscope, Twitter‘s live-streaming app. The fight cost viewers a hefty $100 Pay-Per-View fee, which could be manageable with a large party gathered around a big screen TV. But, the fee remains a huge obstacle for most viewers, especially those without enough friends to split the bill. Periscope viewers could even tune into a ringside live stream thanks to these guys. Although some low-maintenance users just aimed their smartphone at their Pay-Per-View feed to live-stream the fight.

Pay-Per-View has advantages over Periscope, the biggest is in quality. An HD live-broadcast trumps the quality of a handheld recording every time; but, people don’t use Periscope for the quality. They use it to access either places they’ve never been, or places they can’t be at the moment. It was a great opportunity for expats living abroad to get up to the minute coverage of the fight, even if the streams were lagging. 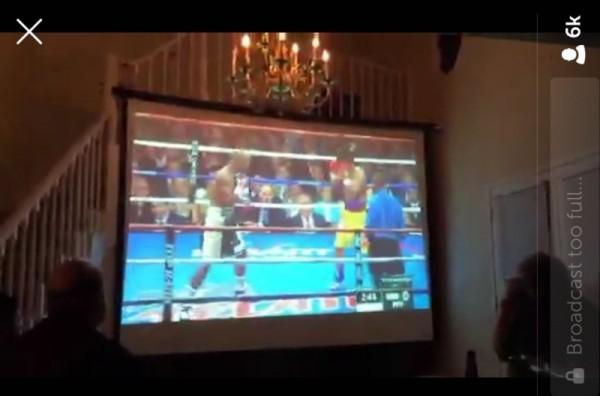 HBO and Showtime cracked down on illegal viewing outlets as best as they could, suing websites that were gearing up to host illegal streams of the big fight. Fight promoters also scanned for bars set to host viewing parties, shutting down those who didn’t obtain exorbitant commercial licenses.

Positive or negative, the buzz surrounding Periscope made Twitter CEO, Dick Costolo, a little cocky as he tweeted that the biggest victor from the fight was Periscope. Periscope may have won the fight, but in this new age of live-streaming, the real legal battles may have yet to begin.