Paper Mario: The Origami King is a difficult game for me to wrap my head around at times. I think it’s safe to say at this point that longtime Paper Mario fans want something more in line with the original N64 title or GameCube’s Paper Mario: The Thousand-Year Door. These days, though, Nintendo seems to view the Paper Mario franchise as a more experimental one that doesn’t need to fit into any single genre, thereby causing a rift between it and fans when it comes to the direction Paper Mario should go.

Before we get too deep in the weeds here, I should tell you what my experience with the Paper Mario series is. I played Paper Mario and Paper Mario: The Thousand-Year Door a long, long time ago, closer to the respective release dates of each game. Like many people, I loved both of those games, and I’ve been iffy on the direction of the series since then.

I played Super Paper Mario a little bit, though clearly not as much as I should have given that people seem to have fond memories of that game today, and I really tried to get into Paper Mario: Sticker Star on the 3DS but wound up disliking it. I skipped Paper Mario: Color Splash on the Wii U largely because I was disappointed in Sticker Star, so it’s been a little while since I’ve played a Paper Mario game. 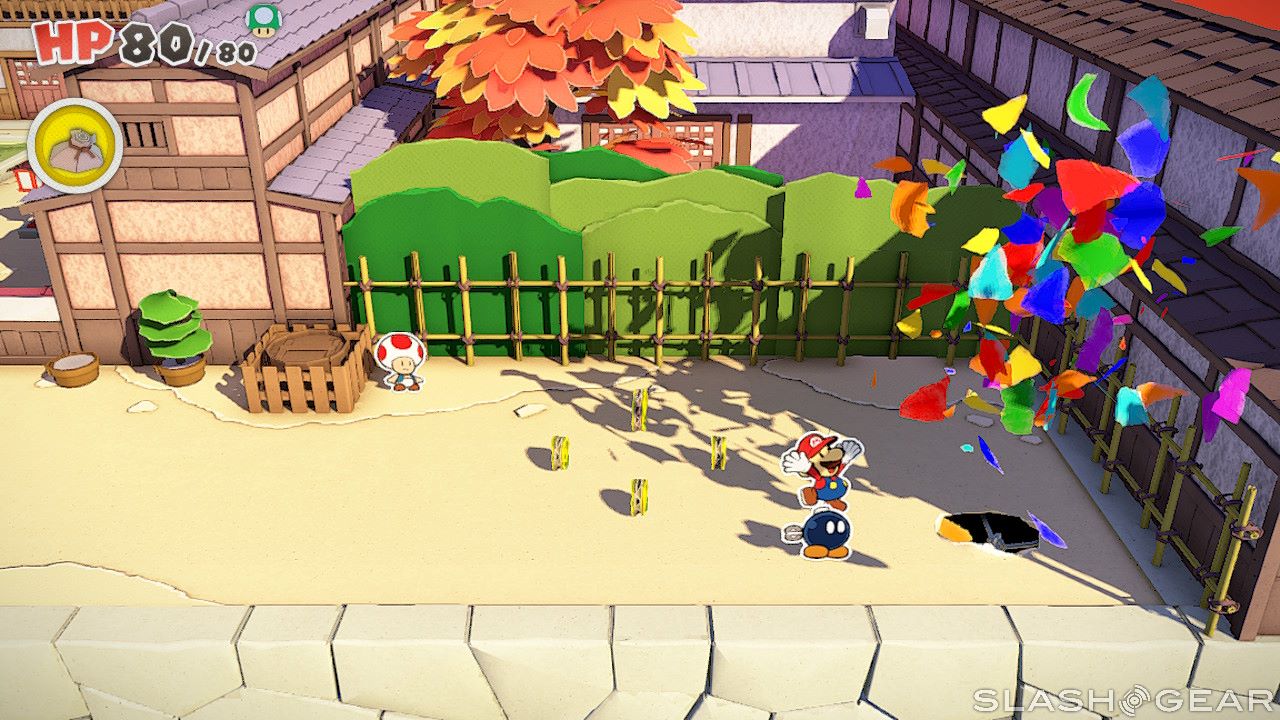 Paper Mario: The Origami King is something of an enigma to me. Is it a puzzle game? An adventure game? An RPG? It’s a little bit of everything, and the good news is that it’s pretty fun. I actually had a lot of fun playing The Origami King, to my pleasant surprise. At the same time, though, I’m left wondering why this couldn’t be more like the Paper Mario games of the past. 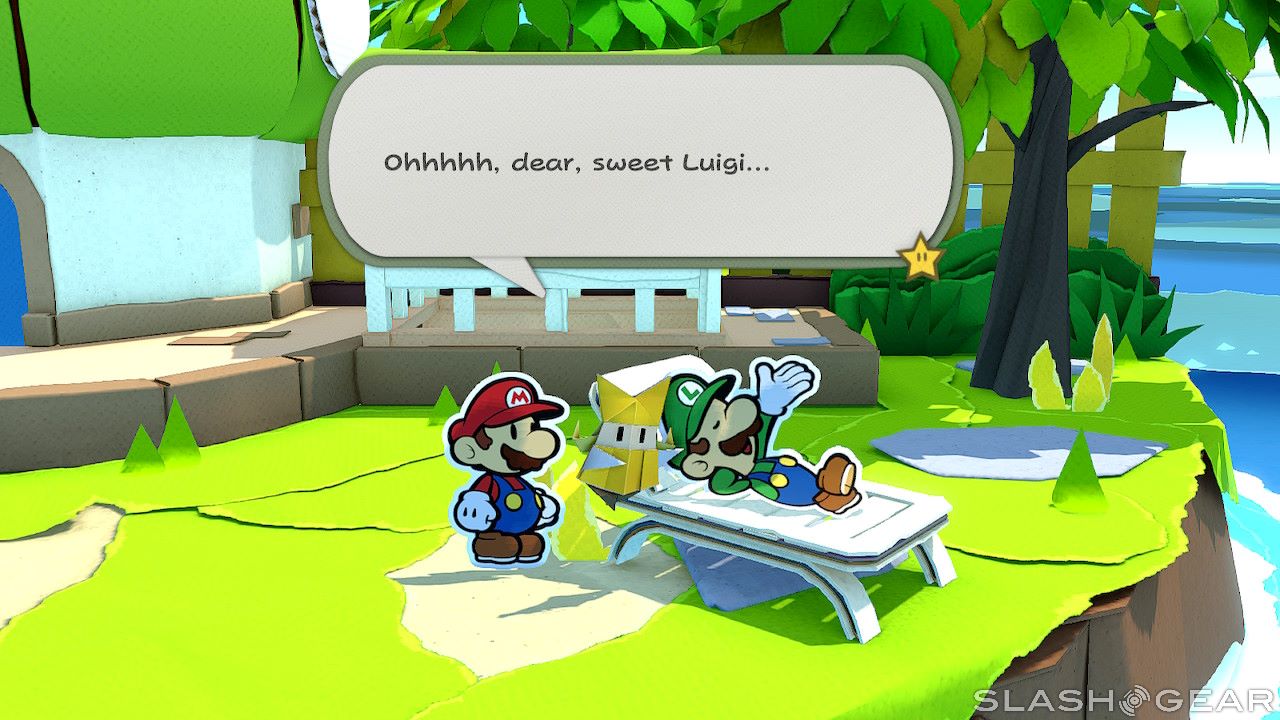 If you don’t want to count the remakes, we haven’t seen a new Mario & Luigi game since 2015’s Paper Jam, and with Nintendo’s focus on dedicated handhelds almost certainly dying with the 3DS, the future of that franchise is up in the air.

Perhaps that’s why Paper Mario: The Origami King flirts with being a traditional RPG in a few different ways. Every battle you’ll fight is turn-based, not entirely unlike a traditional RPG. You have weapons and accessories you can equip, just like in an RPG. You have party members at certain points too, just like you would in an RPG and, indeed, like you had in earlier Paper Mario games. 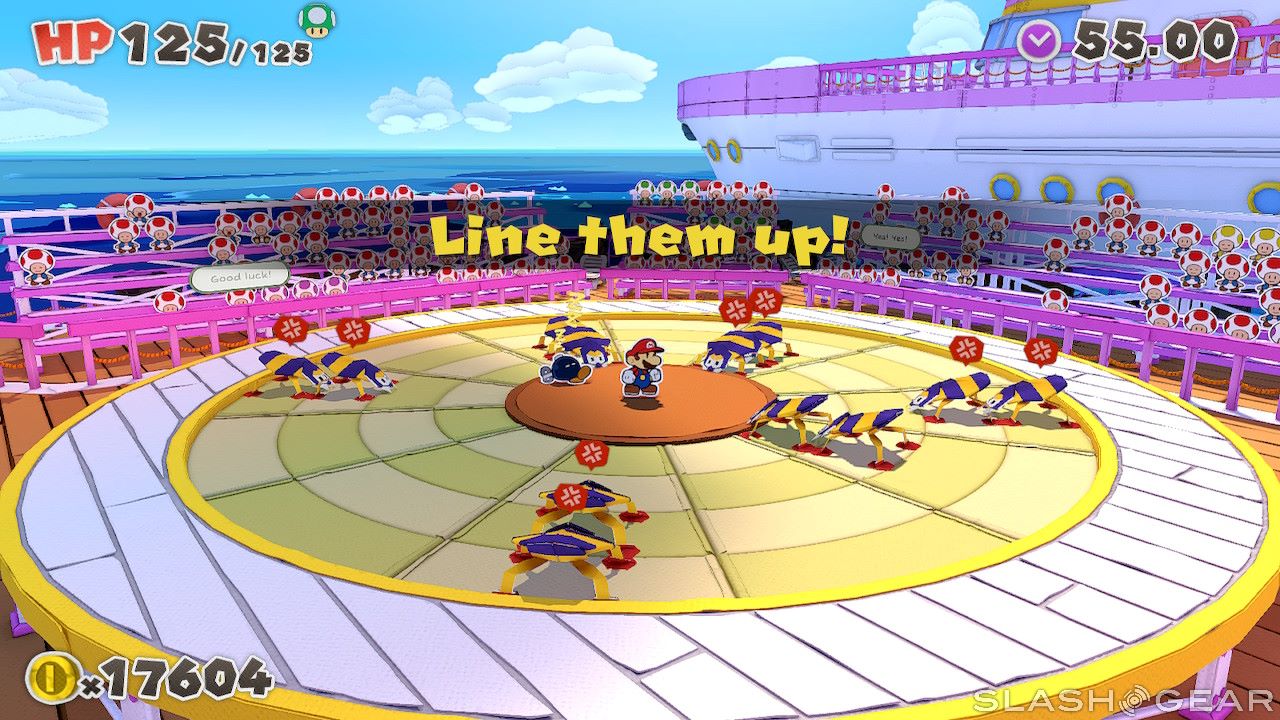 But everything that could be mistaken as an RPG mechanic at first glance only ever goes halfway. Yes, every battle is a turn-based one, but first and foremost, each battle is also a puzzle and not a traditional RPG encounter. You have different weapons you can equip, but often they’re just stronger versions of your boots and hammer without anything particularly noteworthy about them.

And sure, you have party members, but only in a very loose sense, because while they’ll follow you around, you never get to control them directly – they’ll just sit there in battle and periodically attack on their own. They don’t enter dungeons with you, and they aren’t permanent additions to your party either. 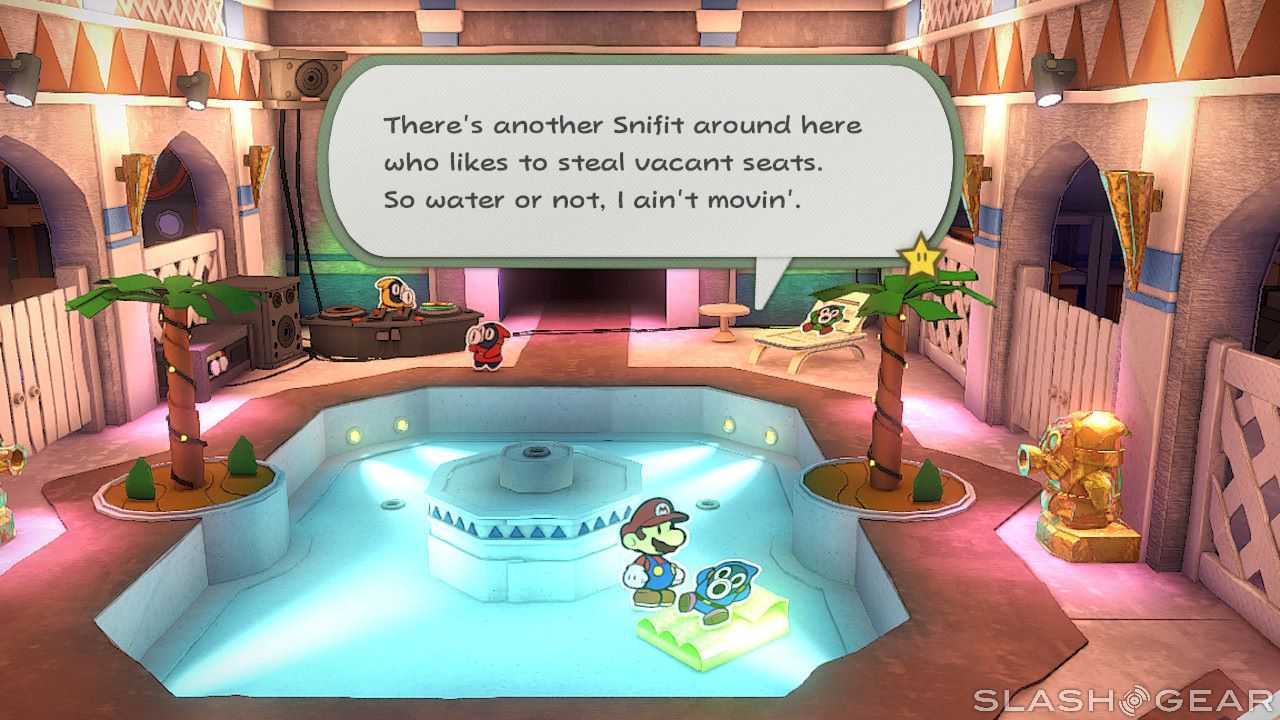 It’s almost like Nintendo wanted to make this an RPG but changed course halfway through development and decided to make it a puzzle game but kept the unfinished RPG aspects anyway. As a result, Paper Mario: The Origami King doesn’t really fit neatly into any particularly genre, but I’ll call it an adventure puzzle game with light RPG elements.

Regardless of what genre this game actually belongs to, I had a surprising amount of fun with it. Each battle is a sliding ring puzzle that tasks you with grouping enemies up, either in a straight line so you can jump on them or in square groups of four so you can hit them with your hammer. You have a limited number of moves to solve each puzzles, but assuming you do figure out the solution, you’ll get a damage boost that’s usually enough to take out all of the enemies in one attack round (assuming you use a sufficiently powerful weapon). 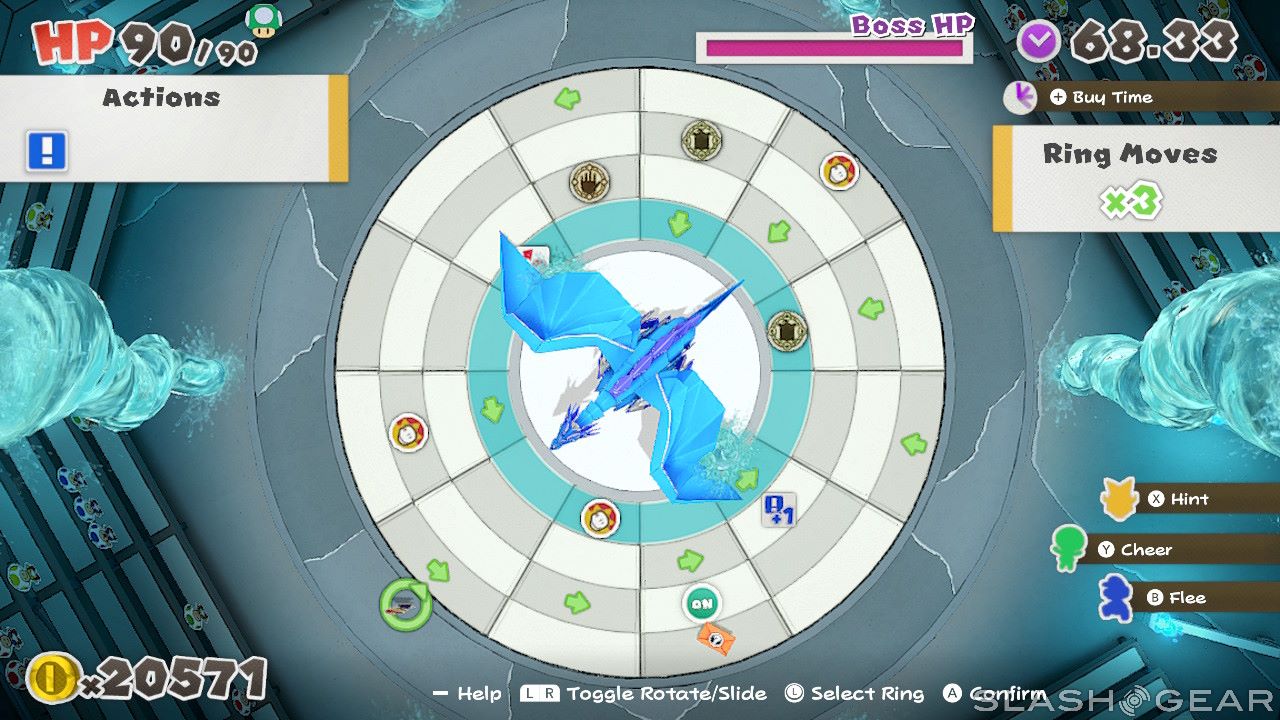 If you don’t figure out the solution, you’ll still likely be able to take out several enemies during your attack run, but it’ll be almost impossible to defeat them all. Leaving enemies on the field means they’ll be able to attack you too, so your penalty for failing to solve each puzzle is taking damage from the surviving enemies.

Getting a damage bonus and avoiding damage yourself aren’t the only reasons to try to solve each puzzle in the first round, as you’ll also get a coin bonus at the end of the battle for solving the puzzle correctly. Coins make the world of Paper Mario go round, and you can use them for a variety of things, so you’ll want to collect as many as possible as you move through the game. 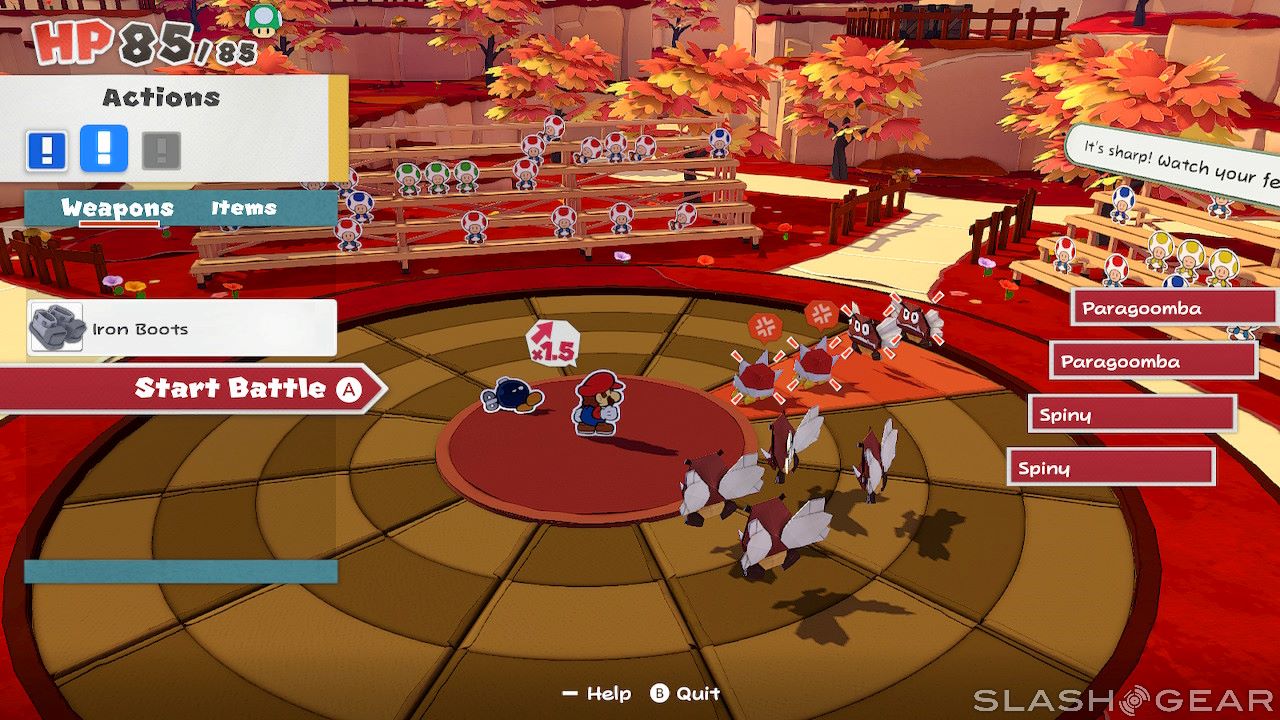 Coins, obviously, can be used to purchase items, weapons, and accessories, but they can also be used to buy more time in battles if you need it. They can even be used to bribe a literal legion of Toads to help you figure out the solution to a battle puzzle if you’re stumped. Coins are important, so jumping into each battle with goal of thinking quick and solving as many puzzles as possible is important too.

Since we’re on the topic, those Toads I just mentioned are a big part of Paper Mario: The Origami King as well. At the beginning of the game, when Olly the Origami King takes over Princess Peach’s castle, he also unleashes his hordes of origami and papier-mache minions on the Mushroom Kingdom. Those monsters terrorize the Toads living in the Mushroom Kingdom, and saving them is something you’ll invest a lot of time into doing.

Toads are hidden everywhere in this game, whether they’re crumpled up into balls, stuffed into holes, rolled up, turned into origami critters – basically any cruel thing that can be done to a flat sheet of paper has been done to these poor Toads. As you rescue Toads throughout your adventure, they’ll fill out the stands in the background of your battles to cheer you on (and they’ll help if you shell out the cash). 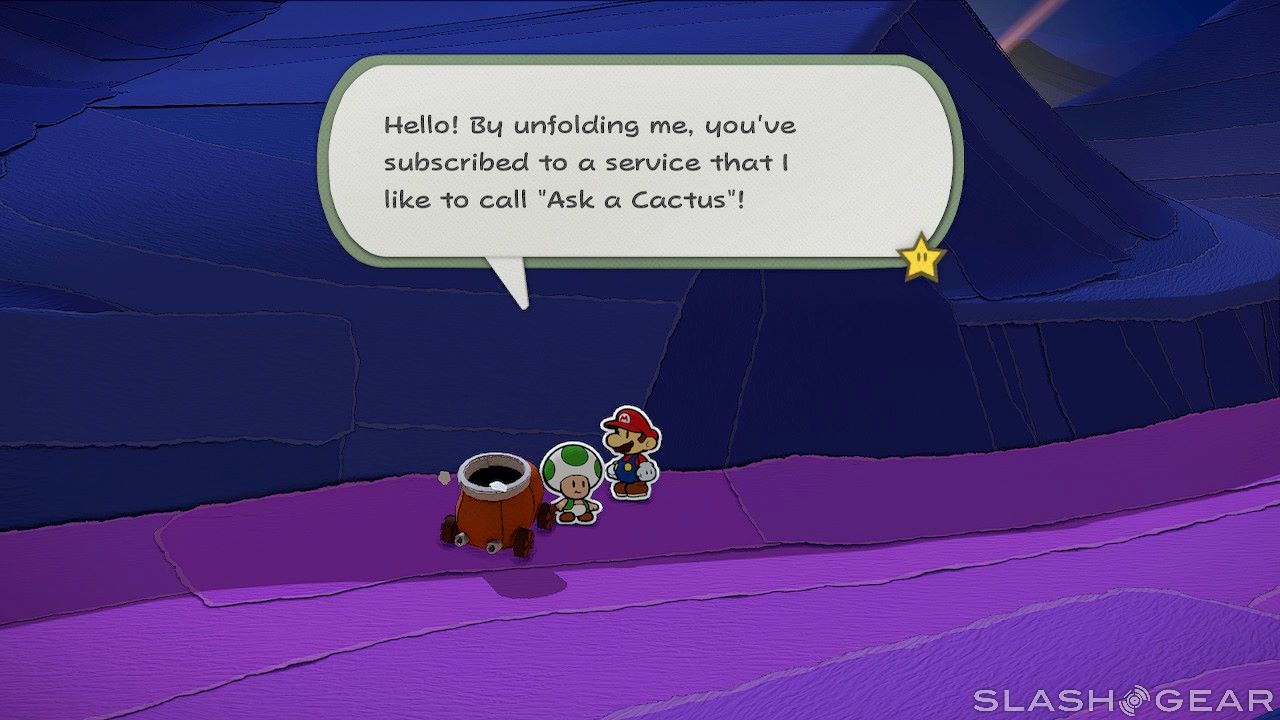 Finding the Toads hidden throughout the world is a fun side-quest of sorts, but they aren’t the only thing to find in each region you’ll visit. Each area also has a certain number of holes to repair using confetti, hidden “?” blocks to uncover, and treasure chests to open. For the completionists among us, the game gives you a percentage completion score for each region and each category, letting you know how close you are to finding 100% of the secrets in a given area.

Aside from finding the hidden Toads, blocks, and collectibles (treasure chests most often hold collectible treasures based on characters, locations, or items in the game), your goal in Paper Mario: The Origami King is to save the Mushroom Kingdom from King Olly, an origami creation that has come to life. 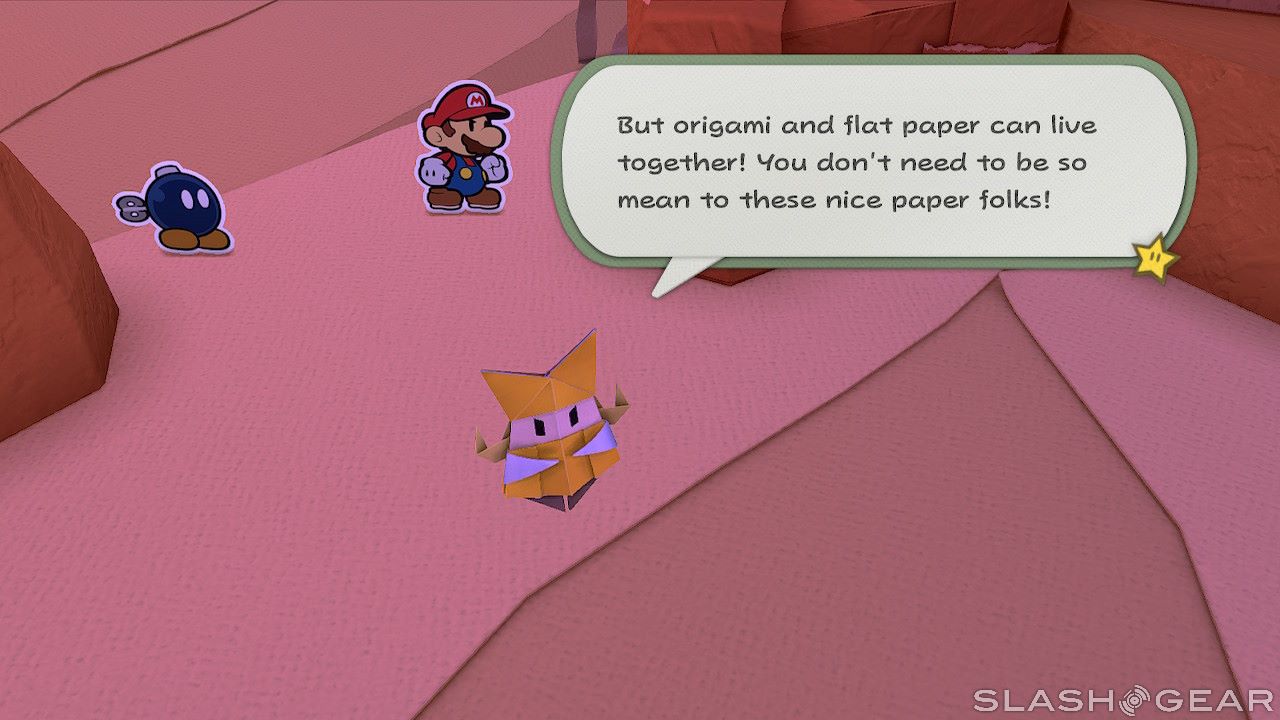 As you work to complete this quest, which has you traveling to every corner of the world to destroy streamers that are wrapped around the castle and making it inaccessible, you’ll be accompanied by Olivia, Olly’s not-evil-and-very-innocent younger sister.

I have to say, the story and the characters in this game are very well-written. The narrative is at least somewhat intriguing, but more importantly, the writing is very clever and sometimes outright hilarious. Olivia is a great character, as are the party members you’ll be along the way. Even the random, run-of-the-mill Toads that are impossible to distinguish from one another often give witty quips when you rescue them. 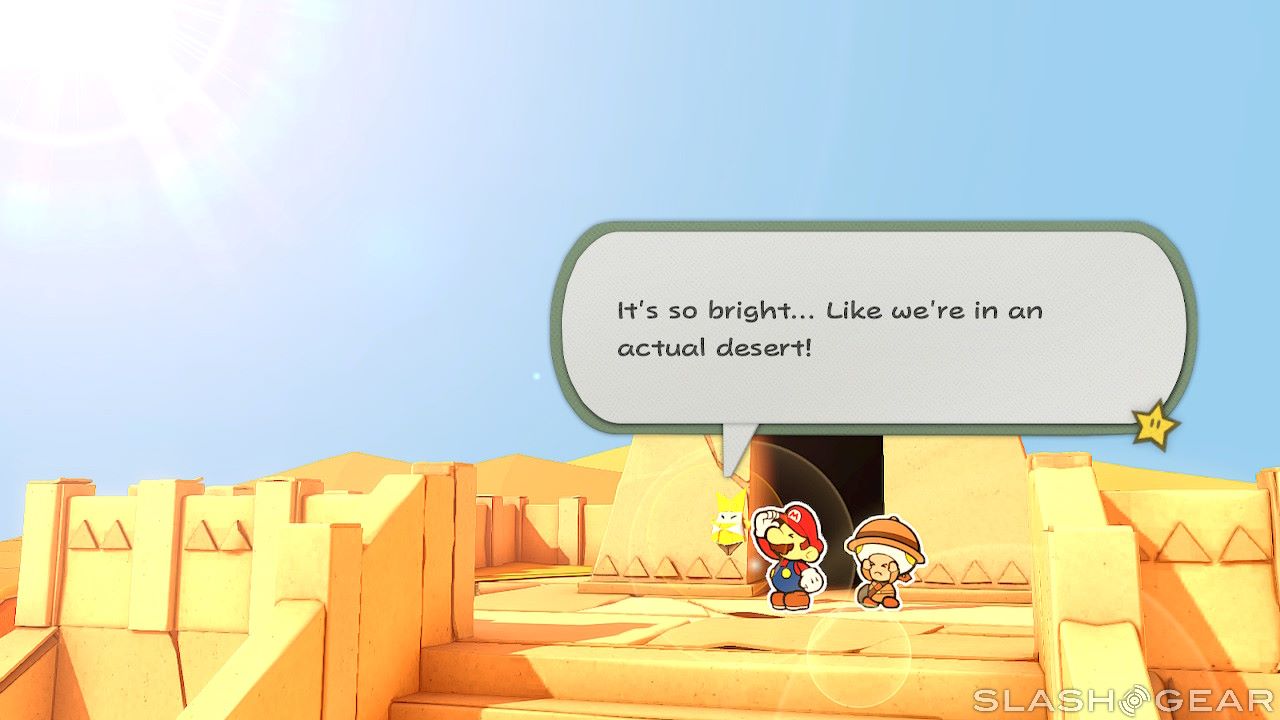 There were a few times where I laughed out loud at this game, but that probably won’t be too much of a surprise because if there’s one area where the Paper Mario series has never disappointed, it’s in the writing. Still, I’m impressed with the writing’s high quality, and if this game is remembered for anything, it’ll be remembered for that.

I’m a little bit conflicted when it comes to Paper Mario: The Origami King. There’s nothing I really dislike about the game, and yet it doesn’t quite hit the mark for me. I can say right now that if you don’t like puzzles, this is not the game for you – since every battle is a sliding puzzle of some kind, you’ll be spending a lot of time trying to solve these brain teasers.

For everyone else, I feel like I can recommend this game, but I have to temper expectations as well. For me, this game comes close to capturing the magic of the first two Paper Mario games, but it ultimately falls short. I look at these “light RPG” mechanics – character progression that only happens in certain points of the narrative, limited accessory options, etc. – and I can’t help but wonder how much more engaging this game would be if Nintendo would have committed to those mechanics and given us actual character progression with actual gear and party systems. 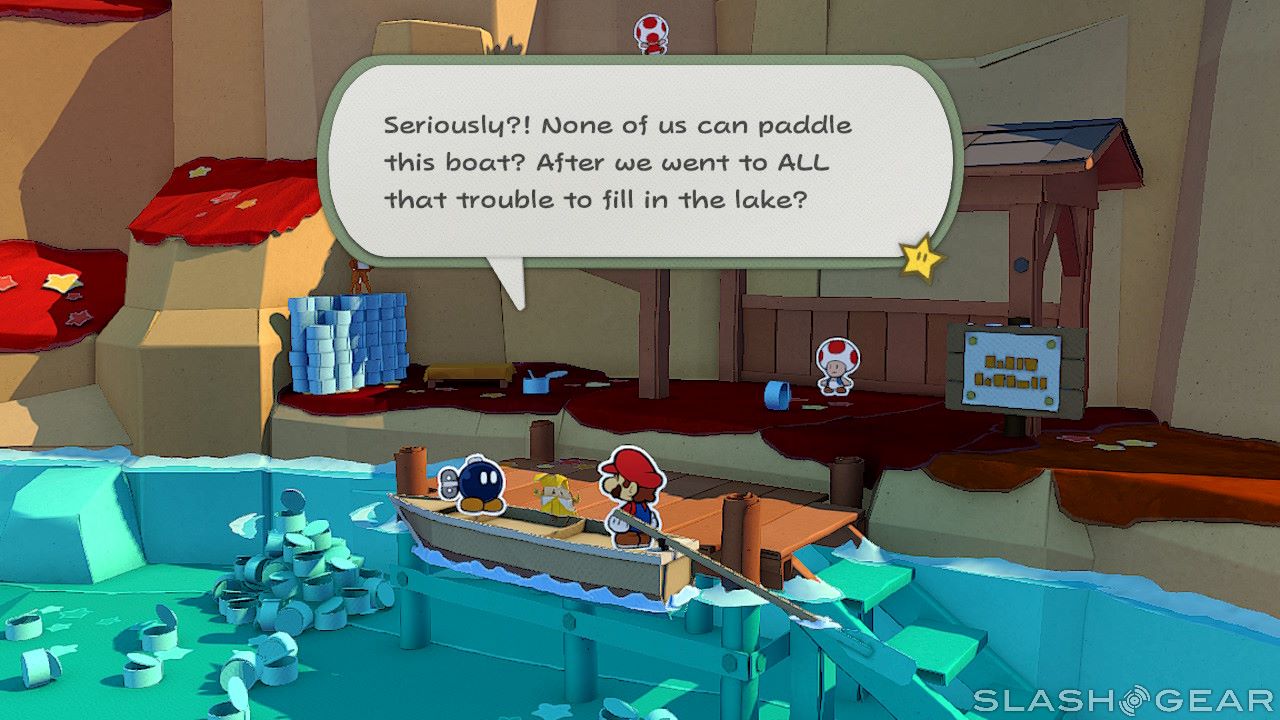 Even if this would have been a full-blown RPG, the puzzle-based battles could stay with minimal tweaking. I actually really like those puzzle battles, and I feel with proper RPG systems in place, Paper Mario: The Origami King could simultaneously please the old guard who insist that the series peaked with The Thousand-Year Door while at the same doing something new and exciting with the Paper Mario brand.

In the end, I’m left with a title I enjoyed, but not one I’m sure is essential playing for Switch owners. If you’ve been a fan of the Paper Mario series regardless of the many different twists and turns it’s taken throughout the years, this is a safe buy.

If, on the other hand, you long for the early days of the Paper Mario series, this game is still worth playing, but it might be better to wait for a sale and check your expectations before you take the plunge. If you can do that, I think you’ll be pleasantly surprised with Paper Mario: The Origami King, but not for the reasons you were probably hoping when this game was first revealed.