Panasonic’s LUMIX GF1 worked its way into the kit-bags of several on the SlashGear team, charmed by its compact size and solid picture and video quality. Now the Micro Four Thirds camera has a successor, the Panasonic LUMIX DMC-GF2, packing the same sensor but new image processing and a refreshed touchscreen interface. Does the smaller GF2 lose some of its sibling’s charm? Check out the full SlashGear review after the cut.

Side by side with the GF1 and it’s clear that the new GF2 is an evolutionary design. The family resemblance is obvious, but Panasonic has also followed the trend in Micro Four Thirds cameras to shrink down the chassis: in fact, the GF2 is supposedly 19-percent smaller and 7-percent lighter, while still accommodating the 12.1-megapixel 17.3 x 13 mm sensor. 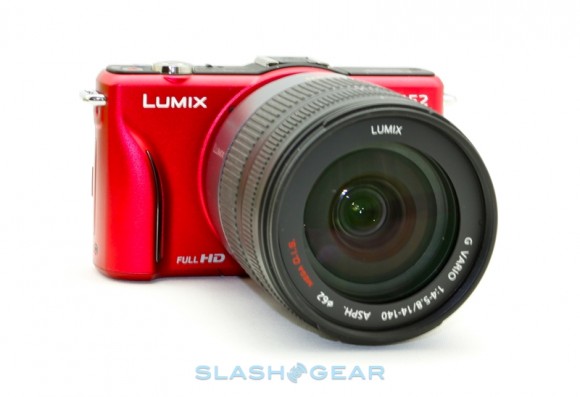 The innovative dual-hinge pop-up flash is still in place, triggered by a button on the rear panel, and there’s a hot-shoe with a port for the optional electronic viewfinder accessory (the same model as for the GF1). Storage is via SD/SDHC/SDXC card, while ports include mini HDMI and either USB 2.0 or AV Out via included adapter cables. A stereo microphone is on the top panel, just to the right of the hot-shoe, but there’s no external microphone input and the GF1’s remote release socket has been removed. 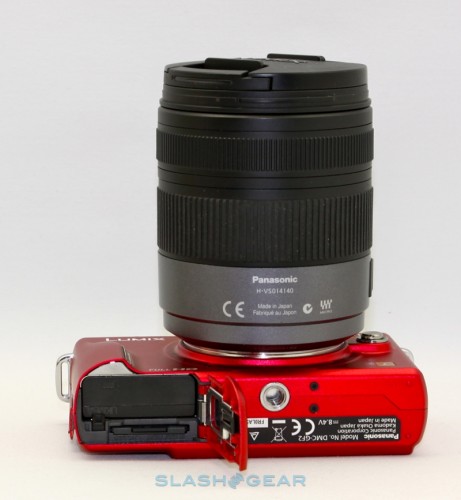 We’ll go into controls in the next section, but most obvious is the new 3-inch touchscreen on the rear of the GF2, which is used for operating the bulk of the camera’s functionality. It’s fixed, rather than angle-adjustable as on Sony’s NEX range, but has a new anti-reflective coating which makes for easier outdoor viewing than the screen of the GF1.

Inside there’s a new version of Panasonic’s Venus Engine FHD for image processing, together with an extended ISO range that now tops out at ISO 6400. Video recording has been boosted, with the GF1’s 720p 60fps mode joined by a new 1080i 60fps mode. The older camera only recorded mono sound, as well, which has been upgraded to stereo on the GF2, and the recording volume itself can be adjusted in the settings.

Two GF2 SKUs are available, following the example of the GF1, with the camera body paired with either a 14-42mm lens or a 14mm prime lens. Also carried over is the lack of in-body optical image stabilization, which is instead offered by certain lenses in Panasonic’s range. The 14-42mm lens supports it, but the much smaller pancake lens does not.

While we’re generally in favor of size-reduction, one unfortunate consequence is that the GF2’s battery is smaller than that of the GF1. That means fewer photos per full charge, Panasonic estimating 300 to 320 shots depending on which lens you’re using. We can’t argue with the GF2’s speed, however. Start-up is less than a second, auto-focus is one of the fastest we’ve seen on a Micro Four Thirds camera, and back-to-back shots are possible in around 1 second intervals. Alternatively there’s a burst mode for 3.2 frames/sec; it will grab up to 7 frames if you’re trying to save RAW files, or can shoot JPEGs indefinitely.

The biggest change is the new 3-inch touchscreen on the back of the GF2, a 460k dot 3:2 aspect TFT LCD which, while requiring a reasonably firm press, is responsive and straightforward. Physical control lovers may find the new LUMIX a step backward, however, since Panasonic has used the touchscreen to retire several of the hardware controls that stud the GF1.

Most notable is the mode dial, previously to be found up next to the shutter release, and the functionality of which has been subsumed into the touchscreen menus. Only a single function shortcut remains, a one-press button to toggle the GF2 into Intelligent Auto (iAuto) mode, which is backlit in blue when active. The power switch and video record button are still present, but the new stereo microphone is where the burst/timer shot switch used to be.

Rear panel controls have also slimmed down. The thumb-dial is still present – though we’d still prefer it to be slightly easier to turn and to protrude from the chassis a little more – as is the four-way control, playback button and quick-menu/function button, but others have been lost in the refresh. The AF/MF toggle and AF/AE Lock buttons are particularly missed.

Panasonic’s menu UI isn’t the most intuitive we’ve used, though after a while we grew familiar with its nuances. It’s possible to pull out shortcuts to the most commonly used controls and pin them to the quick menu for more straightforward access; you can also flick through the menus using the directional controls rather than reaching over to swipe at the touchscreen.

We’re left in two minds about the GF2’s controls. Coming from a GF1 there’s an obvious learning hurdle to get past, and as touchscreen smartphones have shown us, there’s a lot of flexibility on offer when you make buttons virtual rather than physical. Nonetheless, it’s arguably more immediate to twist a mode dial or quickly thumb a manual focus button when you’re in the midst of shooting frames, an immediacy that’s somewhat lost when you have to stab through various layers of menus. The touchscreen will probably make things easier for first-time users, but perhaps also encourage them to leave the GF2 in iAuto mode rather than experiment with the various manual modes on offer.

That reluctance to experiment would be a shame, because the GF2 is capable of some highly impressive photos and a fair degree of manual control. Obviously there’s RAW as well as JPEG output – as well as a hybrid mode which stores both formats – but the Panasonic’s JPEG system does a decent job on its own.

Given the GF1 struggled with visible noise at ISO 800 and above, the GF2’s new ISO 6400 mode is only really useful to impress on the spec sheet. In the more normal range of ISO 100 to 400, however, the LUMIX does far better, especially if you take the extra time to tweak the RAW files in post-production. The pop-up flash isn’t going to win any awards for strength – it’s rated at 6m at ISO 100 – but there’s little in the way of red eye.

As for more out of the ordinary shots, the GF2 supports a maximum shutter speed of 60 seconds, and there are various My Color Modes for tweaking the final picture. As well as eight presets – which work for stills and in movie mode – including Expressive, Retro, Pure, Elegant, Cinema, Monochrome, Dynamic Art and Silhouette, there’s a custom mode for your own balance of color, brightness, saturation and contrast.

The GF2’s contrast AF system offers face detection, AF tracking, 1-area and 23-area focusing modes, as well as touch-to-focus using the touchscreen. You can set the Fn button to lock the auto-focus, though that does then mean you lose the Q.Menu shortcut. As for AE, that uses a 144-zone system with a range of automatic or manual settings; the GF2 showed a tendency to over-expose frames, but you can easily notch that down with the thumb-dial.

Though there are plenty of arguments over whether 720p HD is in fact preferable to 1080i, and while we’d have liked to have seen 1080p on offer, in the end the GF2 offers a choice between the progressive and interlaced modes and users can take their pick. Footage is recorded in AVCHD format or Motion JPEG, and can be played back on a display from the LUMIX itself thanks to the HDMI output; you’ll need to supply your own HDMI cable, however, since that’s no longer bundled.

One of the benefits of Micro Four Thirds cameras over traditional DSLRs is the flexibility available during video recording, and the GF2 is no different. As in the still mode, there’s tap to focus support using the touchscreen, and while they’re not the quickest transitions we’ve seen the overall affect can be quite visually pleasing. There’s also less focus hunting than on some rivals.

Actual footage is crisp and sharp, though with the pancake lens it can be jumpy at times thanks to the absence of optical image stabilization. Mount the GF2 onto a tripod, however, and it’s far more successful. Audio can be hit and miss, however, and with no microphone input there’s no way around that. We’re hoping Panasonic release a microphone adapter for the hot-shoe for some extra flexibility.

The GF1 didn’t just count the SlashGear team among its admirers; in fact it was one of the most loved Micro Four Thirds models around. That leaves the LUMIX GF2 with plenty to live up to. Panasonic has clearly decided to shift the GF2’s positioning to target the consumer crowd, with a greater focus on the iAuto mode and the relegation of more complex – and often intimidating – manual controls into the new touchscreen menu structure. Those manual options are still there, of course, but they’re arguably harder to access on the fly than the various physical buttons of the GF1. 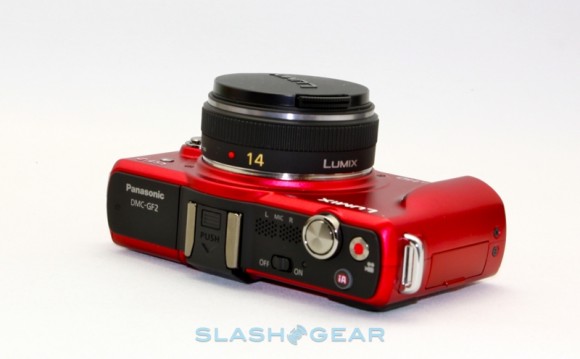 Still, there’s plenty on offer to make up for the changes, not least the physical decrease in weight and bulk. Based on the premise that the best camera is the one you have on you, the shrunken GF2 and its slimline pancake lens stand an even greater chance of slipping into a coat pocket than its predecessor, while still offering solid image quality. Sony’s NEX line is smaller again, but chubby lenses and the absence of an integrated flash have their own drawbacks.

GF1 users, then, are unlikely to see the GF2 as a sensible upgrade path, but for those looking to step away from compact cameras Panasonic have created a very legitimate option. While we’d hope such users would at least occasionally stray from the iAuto mode, the truth is that the GF2 does a decent job at managing its settings when left to its own devices, leaving the manual modes for more challenging scenes such as low-light or nighttime. At $699.95 (with the 14mm pancake lens) it’s not cheap, but it opens the door to flexible lens options and a solid core unit with plenty going for it.