OtterBox is here at ShowStoppers at CES 2013, and they’re just unveiling some new, updated iPhone cases. The Defender series is the company’s most popular product, and they just revealed an updated version that comes with an extra battery, as well as an accompanying mobile app that provides a user interface for monitoring the extra battery.

The case provides the same great protection that the Defender series has always provided, but this updated version, which OtterBox is still calling a prototype, comes with some extra new features, including an extra 1450mAh battery, which will provide double the power of the iPhone 4/4S, which comes with a 1440mAh battery on the inside. 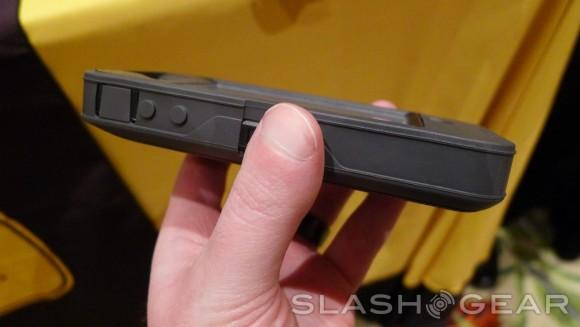 The case also has ten LED indicators on the front, and each one represents 10% of the battery life, and clicking a button below the LEDs will turn on the indicators for a couple of seconds so that you can see what level the external battery is at without having to open up the OtterBox app.

Speaking of the app (which was built by Fueled), OtterBox introduces iON Intelligence technology with this new Defender case. The app tells you how much juice you have left in both your iPhone and the external OtterBox battery, and will automatically determine when your iPhone battery needs more juice. Again, this is still an experimental sample, so some things may change, but the company said that we should expect it to arrive before the summer.