Glancing at the images of the heavily customized Jeep below makes it hard to tell if you’re looking at something new or an older classic Jeep that’s been well taken care of. The new Jeep Wrangler is called the JL internally. This project started with the desire to make the new Wrangler look like an older 1989 Wrangler YJ.

One of the main designers on the project is Greg Henderson. For the project, Henderson and his team had to give the new JL Wrangler a facelift to give it the square headlights that are the classic YJ’s most notable feature. The team also used an 89-spec from bumper to the new Jeep along with rear bumperettes.

Another nice retro touch was adding a black license plate pull-down to reveal a period-correct gas filler. The resulting product is very attractive and a solid mix of new and retro style. The entire idea for the project sprang up around the thought of re-creating a Jeep that led to the founding of a company called Quadratec, which is one of the largest aftermarket Jeep accessory companies in the entire world.

The 1989 YJ Jeep the YJL is based on belong to the man who founded Quadratec decades ago. The Jeep rolls on custom painted wheels with big meaty off-road tires and has some very interesting tube-doors. It rolls on a Teraflex RT4 Long Arm Suspension Lift Kit with Falcon 3.5 Adaptive Shocks for 2.5 inches of overall lift. Those meaty off-road tires are 37-inch units. 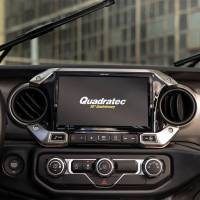 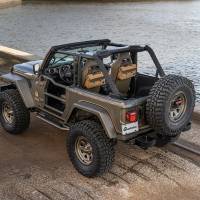 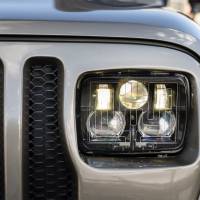 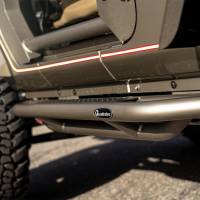 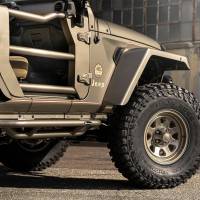 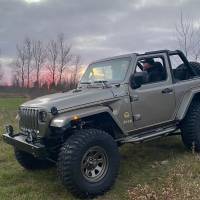 The square headlights sitting in the custom grille have heated covers to prevent ice or snow buildup. The builders also fitted the interior with a custom audio system. The finished Jeep is ready to hit the trails.