If you have forgotten about Project Ara, Google’s promise of a modular smartphone, you can, perhaps, be forgiven a bit. Promised, although tentatively, to launch sometime in early 2015, the now almost mythical device is still nowhere to be seen. Except in developer conferences, blog posts, and, apparently, benchmarking websites. An certain Google Project Ara, model A8A01, appeared on GFXBench and while most of the specs seem normal for a high-end smartphone these days, one detail or two make it sound more like an odd and gigantic tablet instead.

The device, whatever it is, is powered by a Qualcomm Snapdragon 810, which is pretty much the most recent Snapdragon, barring the 820, of course. There’s about 3 GB of RAM and the usual plethora of sensors you’d find in a smartphone. It could, actually, be quite a killer and could mean that Google has updated the core specs to 2015’s components.

Things, however, go to crazy land when it comes to the display and internal storage. The former is described as a 13.8-inch 1920×1080, larger than conventional Android tablets. Internal storage even has two figures, 10 GB and 25 GB, which doesn’t stand for any known configuration, either separately or together. 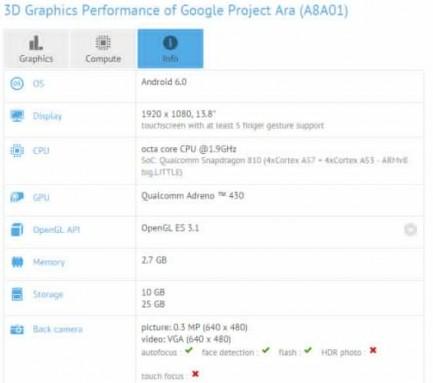 Given Project Ara’s experimental and novel concept of a modular phone, these specs could mean many things or nothing at all. It could simply just be some test board someone at Google is testing. It could also be a possible configuration for a Project Ara tablet indeed.

Whichever the case, the sudden appearance of the name does bring up one important question. Where is Project Ara now and are we actually still on the road to a modular smartphone future. Given months of silence, we might only find the answers, or clues, in the days leading up to Google I/O in May.