While I was at Oculus’s preview event, there was one game that stood out among the rest. Namely because everyone kept telling me that I needed to try it. Plus, every time I walked by the area where it was being demoed, the people playing looked like they were having a blast. The game was Dead and Buried.

The game is set in the old west. Or at least some sort of futuristic, Steampunky version of the old west. For the demo, we were able to play just one area, the saloon. When you think of old saloons, the first thing that comes to my mind is a shootout, and that’s exactly what I was doing there.

When the game first fired up, I was greeted by an old ghost, who talked about the shootouts in his day. I picked one of the four available characters that I wanted to use. I picked the one I liked best, and waited as three other people did the same. One would be my teammate, while the other two would be doing their best to kill us. It was a 2v2 match, with the first team to 25 kills taking the win.

Once we loaded into the game, we all spawned into different areas of the saloon. When you die, you’ll respawn to a random location on your side of the bar. This means that when you look out and see someone across the way, you know that it’s someone that you need to shoot.

The controls were simple. You had two guns holstered at your side. Using the Touch controllers, you would simply reach down to where your holsters would be, and grab on. Then firing was as simple as pointing the gun and pulling the trigger. The actions and motions were all very intuitive, and felt perfectly natural, just like all of the times I used to pretend to shoot guns on the playground as a kid. 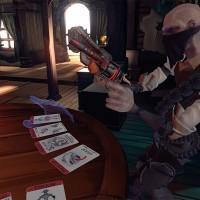 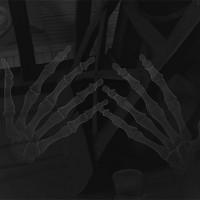 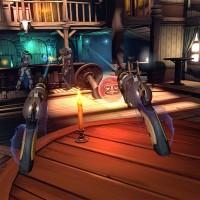 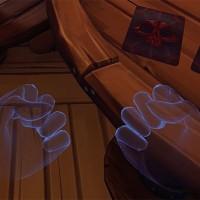 To reload, you’d flip the gun inward, by rotating your wrist 90 degrees inward. This part seemed strange when it was explained to me, but once I had a gun in my hand, it made perfect sense. Flipping the gun like this would have the revolver’s chamber flip outward, and spin. With a real old-timey revolver, you’d make the same motion, and then load in your bullets one by one. In the game, you’d just flick your wrist, wait a moment, and then flick it the opposite direction. Then you’re ready to fire.

As you die and get respawned, you sometimes will see a different gun nearby. You can pick these up, and fire grenade-like projectiles, a shotgun slug, or a few other types of ammo.

The match went by pretty quickly, as I ducked behind crates and pillars, to avoid being shot. I’d lean out and take my own shots, and then quickly move back into cover while reloading. All the while, I could talk to my teammate and even the enemies via voice chat. This means taunting your enemies, and giving directions to your friend.

By the end of the game, I had worked up a sweat. I was ducking down, leaning over, and moving rather quickly to pick off shots without exposing myself for too long. Afterwards, I went over and high-fived my teammate (who I hadn’t met until this moment) for our narrow victory.

In all, this was my favorite game coming out of the demo session. Unfortunately, launch price and availability is not currently available. We’ll be sure to let you know when these are announced.