Images of the NVIDIA Tegra Tab leaked a short while back and it looks like another leak has surfaced. This latest comes by way of the NCC, which is the National Communications Commission coming out of Taiwan. Anyway, this filing has the tablet listed as the P1640 and coming by way of NVIDIA.

There was an image of the front and back of the tablet included in this NCC filing, though those earlier images were much easier on the eyes. If nothing else, this set of blurry images does lend some credibility to those earlier images. There has been talk of NVIDIA announcing the tablet during IFA, but so far we have yet to see any teasing and have to consider that rumor at the moment.

Aside from the images, this filing also brought talk of the specs. It looks like this tablet will arrive sporting a 7-inch display with a resolution of 1280 x 768 and powered by a 1.8GHz NVIDIA Tegra 4 processor. Other specs that have been revealed include WiFi 802.11 b/g/n, Bluetooth, micro HDMI, USB and a 5 megapixel rear-facing camera. 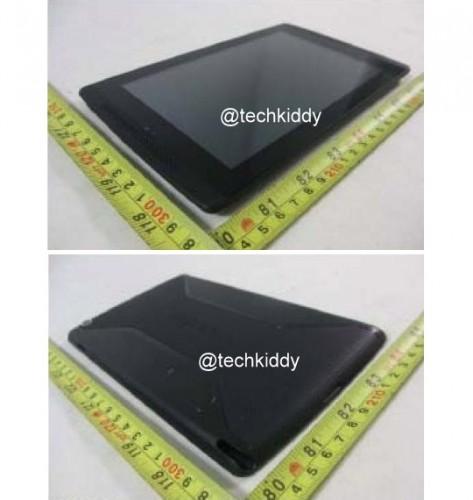 There was also mention of a front-facing camera, however the specifics for that have yet to be revealed. Otherwise, the NVIDIA Tegra Tab P1640 is expected to arrive running Android 4.2.2 Jelly Bean. As far as Jelly Bean, we would look towards this tablet having a build similar to what we have seen with the NVIDIA SHIELD.

There was also some additional talk on stylus support, though the specifics remain a mystery on that. We have seen NVIDIA demo a pressure-sensitive stylus in the past, but we do have to remember that demonstration was done using a developer unit tablet. Or in other words, there may be some difference between what we saw then and what will arrive with a final retail unit. All said and done, given what we have seen NVIDIA do with the SHIELD, a tablet does seem like it could be interesting.