NVIDIA may have stepped back from the mass consumer Android market, but it has remained a key figure in pushing Android gaming forward. This latest update to the Android TV SHIELD console, is one proof of that. The update brings Android 6.0 Marshmallow to the device, which is enough cause for celebration. But for gamers and developers alike, it is the arrival of Vulkan drivers that show NVIDIA’s commitment, making the SHIELD the first Android consumer device to have support for the new API (the Galaxy S7 won’t be shipping until March 11).

Vulkan is the latest hype in the gaming and computer graphics industry. Almost like a throwback to the old days of computers, Vulkan gives developers lower level access to graphics hardware functionality, lower than even that provided by OpenGL, which, is now considered mid-level in comparison. Vulkan does away with layers of resource and error management cruft that has burdened OpenGL, leaving developers and other layers on top of Vulkan to implement that, preferring to focus on speed and performance. 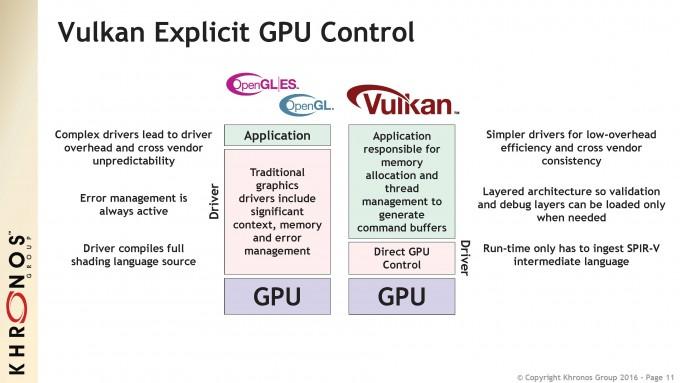 Almost ironically, Vulkan was largely based on the Mantle API that AMD, NVIDIA’s rival, was trying to push. Now that it’s a new industry standard, however, NVIDIA is showing sportsmanship, and business sense as well, in banding with its peers to push the new API. Making the NVIDIA SHIELD a more interesting game development device, it is shipping Vulkan drivers now. Google already announced that future Android versions will support Vulkan, so it is, in a way, already preparing for that.

The update, of course, also brings the advantages of Android Marshmallow to the console. In particular, the new unified storage system, where even external storage can be setup to be seen as part of one huge internal storage, would benefit the SHIELD well. But in addition to that, NVIDIA is also introducing new SHIELD-specific features, including: