The latest in a long line of NSA-centric leaks comes a report about alleged project “Dishfire” from The Guardian, a program said to result in the harvesting of millions of text messages by the security agency on a daily basis. This is not targeted message collection, instead being the mass harvesting of nearly 200 million messages per day, which are then stored and used to extract details like credit card info, geolocation, and one’s contact networks.

The information, not surprisingly, comes from documents provided by Edward Snowden, and is presented as part of an investigation that included UK’s Channel 4 News. Says the documents, of which The Guardian has several screenshots posted, included the one featured below, the database of text messages has also been used by the United Kingdom’s GCHQ spy agency in order to search metadata originating from “untargeted and unwarranted” communications of UK citizens. 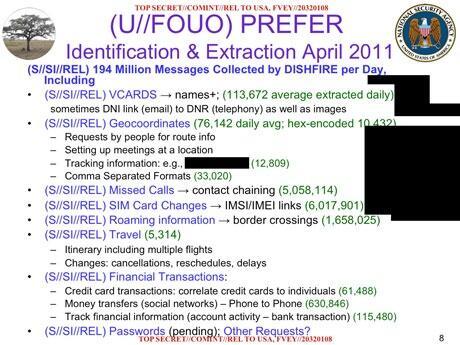 The text messages have reportedly been used extensively by the NSA to pull data on things like financial transactions, travel plans, and such, of both targeted individuals and those not suspected of anything. An automatic analysis is shown as performed on the pilfered messages, with that subset of the program — called Prefer — using details from automatically-generated text messages to complement harvested metadata. Automatic text messages include things like payment confirmations, booking confirmation, and more.

The documents show an average of 5 million missed-call notifications extracted, as well as the details from 1.6 million border crossings, 110,000 names from electronic business cards and such, and more than 800,000 financial transaction, all being nabbed in a single day. In excess of 76,000 messages were also used to harvest location data in a single day. One screenshot in particular shows this content extraction being referred to as “a goldmine to exploit”.