North Korea has produced another tablet for its unfortunate citizens, one it calls the ‘iPad.’ Obviously not being an Apple device or anything like it, the tablet runs an unknown operating system and features bland, low-end specs, though compared to other limited offerings in the nation, it may be one of the more desirable consumer computing products. Apple hasn’t commented on the illicit use of its brand.

The new North Korean tablet, which is fully named the ‘Ryonghung iPad,’ was made by company Myohyang IT Company, and it is part of a system that seems to include a USB keyboard and a case, enabling it to be used as a laptop of sorts. Per the product’s marketing material, there are ‘more than 40 apps’ available for the tablet, an anemic number by any modern standard, but enough, perhaps, to make it a decent productivity device. 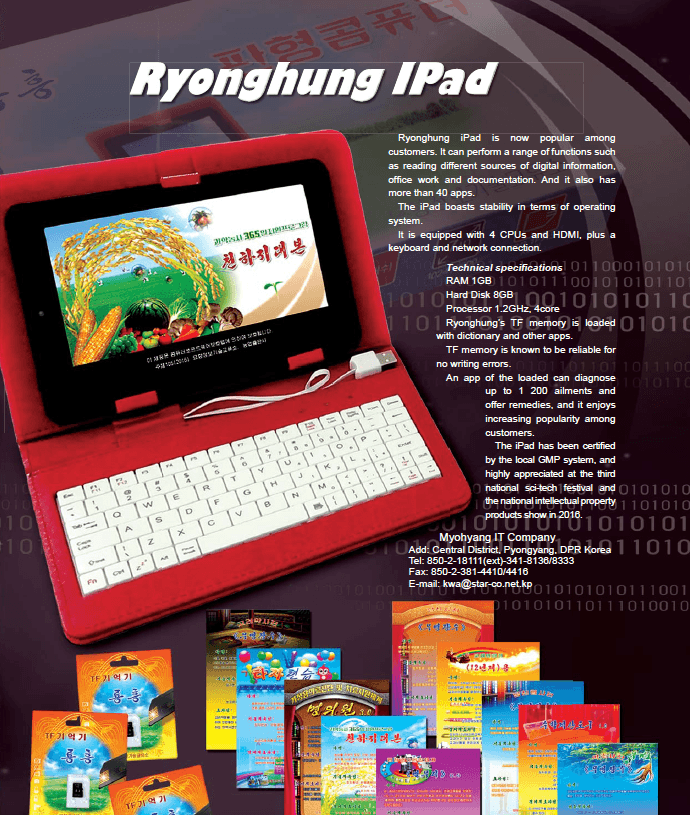 Marketing material reveals the tablet is decidedly very different than the actual iPad: it has an HDMI port, an unspecified 1.2GHz quad-core processor, 1GB of RAM, and 8GB of internal storage space. There’s also networking capabilities of some sort, though given the limited Internet access inside the nation, the nature of this capability is unclear.

It isn’t clear what OS this tablet runs, though no doubt it is one made by the country itself, as we’ve seen in the past. The apps are said to include things like a medical app called ‘Good Doctor 3.0.’ a calculator, and some sort of agricultural product. This isn’t the first time we’ve seen an app surface within North Korea; there was the special tablet for North Korean elite we saw back in December, for example.