It seems that Sony is kicking its smart eyewear plans into high gear. Just after releasing a video that details the idea behind its SmartEyeglass Attach! single-lens display module, it is now announcing the upcoming availability of its binocular display sibling, the original, non-attachable Sony SmartEyeglass. This, however, and hopefully, isn’t the final version of the device, but even as a first developer edition, it is already more affordable and more available than that other popular smart spectacle, Google Glass.

Unlike the SmartEyeglass Attach, this SmartEyeglass, model SED-ED1 to be exact, comes with a complete frame. But there are very big differences between Sony’s implementation and Google Glass. Sony’s eyewear is terribly tacky and geeky looking and will most likely not fit everyone’s tastes. Second, there is a conspicuous wire that connects the glasses to a separate controller. The controller itself is the one that speaks to the paired smartphone, so not much hardware is in the glass frame itself, which doesn’t really explain why they still have to be so thick and bulky.

But the biggest difference between the two is the display. Google opts to hide the display in a corner while Sony wants to put it right in the middle. It claims that this makes it so that there is nothing that will obstruct your view. Whether its holographic technology is less distracting and safer needs more real world testing. The AR lenses, however, only produce monochrome images. 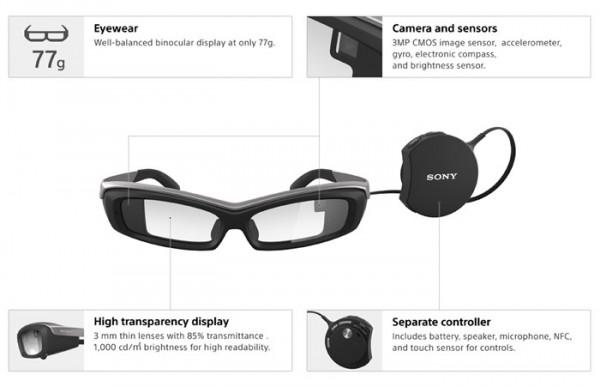 Sony really wants to overlay a piece of your digital world on top of the real world, which makes the SED-ED1 more ideal for, say, AR-based learning and guidance. It could, however, also prove to be more “in your face” when you take into account notifications. The glasses will pair with devices running Android 4.4 or later. For now, the list of SmartEyeglass compatible apps include Twitter, Facebook, Gmail, RSS, calendar and voice control, but Sony has also released the SDK to encourage developers to get their hands wet as soon as possible. These apps will have to be downloaded from the host smartphone app but will run as regular Android apps on the smartphone.

Now for the fun part. Sony’s price tag for the developer edition Smart EyeGlasses is only $840, well under Google Glass’ $1,500. And it will be available starting March in Japan, United States, United Kingdom, and Germany, as well as enterprise customers based in France, Italy, Spain, Belgium, Netherlands and Sweden. That’s definitely a whole lot more than Glass’ initial audience. Now if only they make it look better as well.