Well, this certainly is interesting: lately, we’ve been hearing all about the 32GB Nexus 7, which has been listed with a price tag similar to that of the 16GB model quite a few times. This has lead many (including us) to believe that the 32GB Nexus 7 will be replacing the 16GB model once it’s eventually revealed, but a new internal Staples document suggests that may not be the case. Uncovered by Android Police, this document shows that it will instead be the 8GB model that Google will look to phase out once the 32GB model is announced.

The document covers Nexus 7 endcaps for Staples stores, and more specifically, what those endcaps will look like once the 32GB Nexus 7 is released. Once October 30 rolls around – one day after the Google’s big Android event, remember – 8GB Nexus 7s will become clearance items, which of course means that Staples will look to move them quickly. This also confirms what we were expecting – that Google will unveil the 32GB Nexus 7 at its event on October 29.

So it seems that once the 32GB Nexus 7 has been revealed to the world, Google will stop producing the 8GB model. That makes much more sense than what we were originally thinking, and also explains why retailers are pricing the 32GB Nexus 7 in the $250-range. We’re not sure what price the 16GB model will drop down to, but it seems safe to assume that the 16GB variant will be given a $200 price tag once this new version is on the scene. 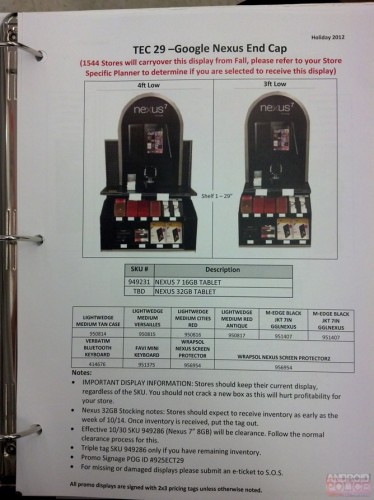 Of course, as Android Police points out, it’s possible that Google could continue offering the 8GB model online while only phasing it out in retail stores, but it doesn’t seem like there would be much point in that. In any case, Google’s Android event is right around the corner, so we should be getting all sorts of official details soon enough. Stay tuned.