There are 75+ designs of the Ultrabook already, and now Intel is working with manufacturers to present multiple hybrid/touch designs. From the demonstration, the touchscreens within the Intel were extremely fluid – and didn’t skip a beat. We’ve all been waiting for manufacturers to incorporate touchscreen technology into their hardware, and the unveiling wasn’t too surprising.

Prior to the event, they let random individuals try out the touchscreen technology and even took a few testimonials. One person, Veronica, stated “I like it better… It’s more fun, it’s a new thing. It’s also easier, more immediate, modern… Super fast”. The important change will obviously be ‘speed to action’. Maneuvering to do some things over a touchscreen is just easier, so it’s really only going to improve the user’s experience. 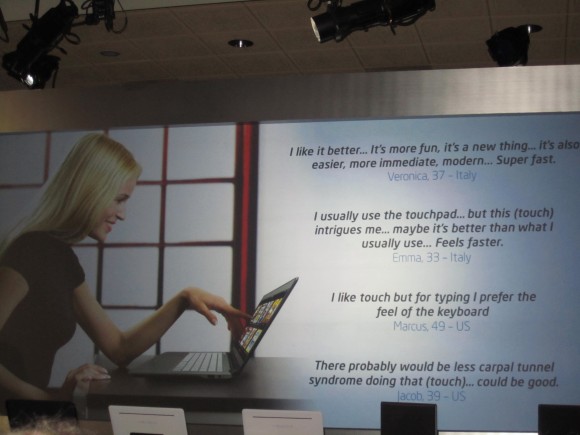 Next up, they described users will be able to vocally control their laptops at very quick rates. The speech activation doesn’t go through the cloud like most other voice recognition clients – it is built right into the device. Even with an accent, you can teach it to understand you. It will learn your voice over time and can be set to talk back to you. Siri was only the beginning.