Newly discovered ankylosaur species had bizarre armor unlike any other

The Natural History Museum has announced the discovery of a new ankylosaur species that, the scientists discovered, had a unique type of armor that hasn’t been observed on any other vertebrates — extinct or living. What makes the armor so unique? Not only did this particular dinosaur have large spikes protecting its ribs, the spikes were also attached to its ribs.

The unique armor was revealed by a fossil discovered in Morocco; it is estimated to be between 167 million and 163 million years old, making it the oldest ankylosaur discovered. The dinosaur was herbivorous and, adding to its notability, is the first time an ankylosaur has been found in Africa. 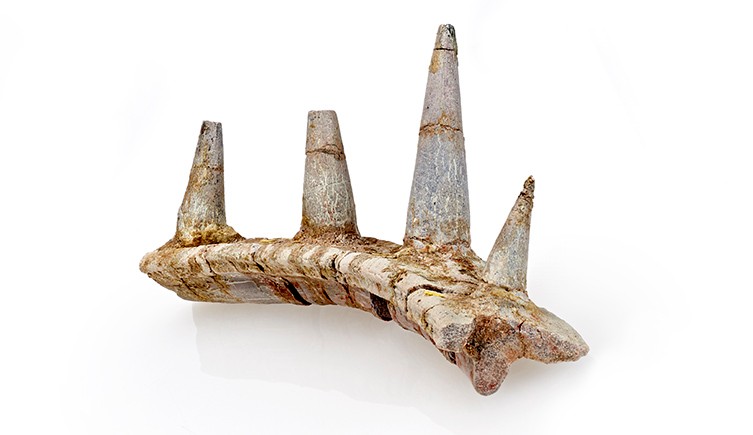 The ankylosaur had bony spikes around its body to help protect it from the giant predators that lived during the same time period. Unlike its peers, however, this particular dinosaur had large spikes that were fused to its rib bones rather than embedded within the skin.

Typically speaking, ankylosaurs featured bony plates in their skin, some of which grew outward to form protective spikes. The researchers identified the unique armor as belonging to an ankylosaur by cutting up the fossil bone, making thin sections of it, and studying the bone structure. During the time period from which the fossil originates, only ankylosaurs had the same signature found in the bone. Why the spikes formed this way remains a mystery.

The researchers say it is possible the ankylosaur was one-of-a-kind among its peers, but it is also possible the fused rib-spike armor was a variation in the early evolution of the species’ armor. Natural History Museum armored dinosaur expert Dr. Susannah Maidment commented on the discovery, explaining:

Having armour fused to a rib is just totally bizarre. It is totally unlike any extant or extinct vertebrate that we are aware of. We don’t see this phenomenon of an osteoderm fusing to a rib in any other vertebrate, living or dead. It is difficult to come up with analogues, really, because there aren’t any.