The Hubble space telescope may be aged, but it still takes some of the most spectacular images of our solar system that you will ever see. NASA has shown off a new image of Mars taken by Hubble and it is high resolution showing off detail on the surface of Mars as small as 20-30 miles across. It never ceases to amaze that the Hubble Space Telescope can snap pictures that detailed of a planet that is 50 million miles from Earth.

The image was taken on May 12, 2016 and shows many of the Red Planets major surface features. The dark area in the far right of the photo is Syrtis Major Planitia, one of the first major surface features identified by astronomers back in the 17th century. Ancient astronomer Christiaan Huygens used that particular feature to measure the rotation rate of the planet. 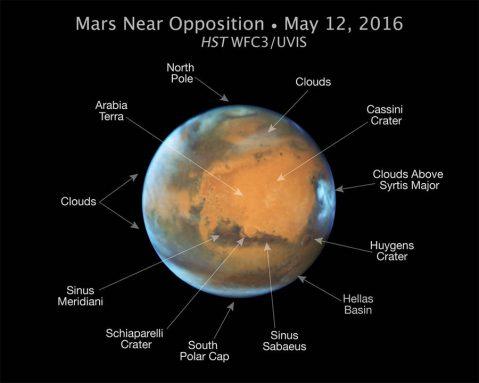 Scientists today know that Syrtis Major Planitia is actually an inactive shield volcano and in this image, it has clouds around its summit. The image also shows the Hellas Planitia basin, the bright oval to the south of Syrtis Major. This feature is 1100 miles across and almost five miles deep, it was created 3.5 billion years ago by a massive asteroid impact.

In the image center is Arabia Terra, an area covering about 2800 miles that is densely cratered and rife with erosion indicating it may be one of the oldest areas on the planet. The area is also festooned with dried river canyons that aren’t viewable in this image. A large blanket of clouds covers part of the southern polar cap and the northern polar cap is much smaller in icy diameter than it is during winter because it is late summer on Mars. On May 30, Mars will be at the closest to Earth it has been in 11 years at a distance of 46.8 million miles.