Last summer the New Horizons spacecraft made its closest pass by the dwarf planet Pluto. The spacecraft is still sending back data and images and the latest images to be released by NASA are now available. These images show part of a sequence of images that were snapped near the probe’s closest approach to Pluto and have resolution of 250-280 feet.

The image shows a variety of cratered, mountainous, and glacial terrain. The images were taken in a series and from a strip about 50 miles wide. The feat of engineering that resulted in NASA placing a spacecraft close enough to send back images as detailed as these of a planet 3 billion miles away is more than impressive. 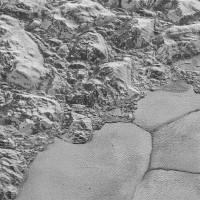 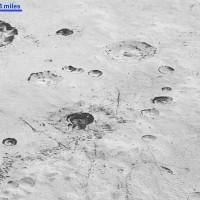 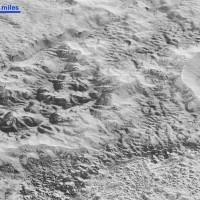 The area seen in the images is a section of Pluto informally names Sputnik Planum and shows some of the al-Idrisi Mountains. The images show close up resolution of icy plains with major craters smashed into the icy surface show scientists that the icy surface of the planet has distinct layers.

Other closeup images give us a glimpse at how erosion and faulting are changing how the surface of Pluto looks. The images in this sequence were taken with the Long Range Reconnaissance Imager about 15 minutes before the closest approach to Pluto at a range of about 10,000 miles from the surface of the dwarf planet. Better photos are expected in the coming days.