New electronic fibers can be embedded in textiles as sensors

EPFL researchers from the Laboratory of Photonic Materials and Fiber Devices have developed a new technology that can be used to detect the movement of the body. The researchers say that the breakthrough could result in clothing or hospital bed sheets that can monitor breathing and other vital movements. The electronic fibers could also be used to allow robots to interact more safely and intuitively with humans.

Researchers say that the soft transmission lines they’ve developed have opened the door to these possibilities. The sensors can track multiple kinds of fabric to deformation, such as stretch, pressure, and torque, all at the same time. The team says it’s very difficult for sensors to measure several stimulations simultaneously. The team incorporated concepts from reflectometry to create a soft fiber-shaped sensor that opens doors for smart textiles.

The technology works similarly to radar according to the researchers but sends out electrical pulses instead of electromagnetic waves. The fibers operate like transmission lines, known from high-frequency communication. The system measures the time between when a signal is sent out and when it’s received. That difference can determine the exact location, type, and intensity of deformation. 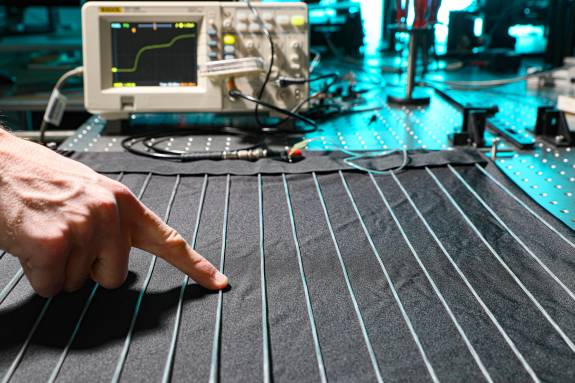 Researchers say that this particular kind of detection technology has never been used in structures combining extended mechanical flexibility and high electronic performance before. Those features are crucial to measuring the deformations. Creating the fibers is complicated and involves an optical fiber fabrication process applied to unusual materials, such as elastomers or liquid metals that serve as conductors.

The team says the trick was to create transmission lines made entirely of soft materials using a simple method with the ability to be scaled up. The next step will be to make the technology more portable by reducing the footprint of the peripheral electronics.