Nemeio e-paper keyboard lets you customize each and every key

Decades after they were introduced in the very first typewriters, keyboards remain one of the most critical input methods in modern life, even with touch devices. Despite its importance, very little has changed in the venerable keyboard and there is still no one keyboard to fit all. Enter Nemeio, a French company that’s making the still unnamed keyboard of the future. Rather than simply let you change keyboard mappings and try to remember them while looking at the same keys, this keyboard while change its display from keys to numbers to even icons.

It’s really Apple’s MacBook Touch Bar meets Lenovo’s e-paper keyboard. While you can already change what keys on a keyboard do thanks to some specialized software, the keys themselves don’t change. “A” is still “A” even if you assign it to “Select All”. That’s mostly because these marks are painted, engraved, etched, or whatnot. In other words, they’re permanent.

Using e-paper for displaying those marks solves more than one problem. For one, it’s dynamic so each key can display whatever you want. But unlike Apple’s Touch Bar, e-paper is exponentially more energy-efficient. It only requires power to change what’s displayed. It does have backlighting, too, but that should still be negligible. 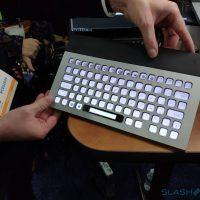 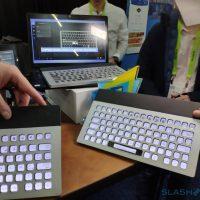 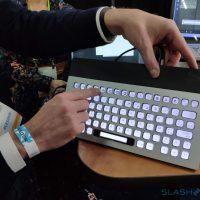 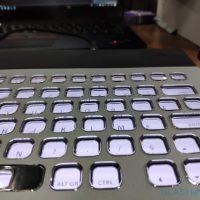 Nemeio’s keyboard connects to Macs and PCs via Bluetooth and is meant to be portable, though it’s larger than most portable Bluetooth keyboards. You’ll need to use a special program to map the keys but it’s as easy to drag and drop. Sadly, there is no final word yet on availability and pricing so hopefully, it won’t suffer the same fate as other customizable keyboards like it.