If case you haven’t been following closely, NASA’s Dawn spacecraft has been sending back photos from the dwarf planet Ceres over the past several months, each one showing the celestial body more clearly as the spacecraft grows closer. Soon after the pictures began rolling in, NASA had a mystery on its hands: bright spots shining in an otherwise dull and dim landscape. As it grew nearer, the photos also revealed a cone-shaped mountain. Dawn recently sent back a close up shot of one shiny structure, but the puzzle is no closer to being solved.

The shiny spots stumped researchers when they surfaced in February, but by May the images were slightly closer, revealing that the clusters were composed of smaller dots of light concentrated in a specific crater. At that point researchers stated that the spots were composed of “highly reflective materials”, and speculated that ice may be the cause. 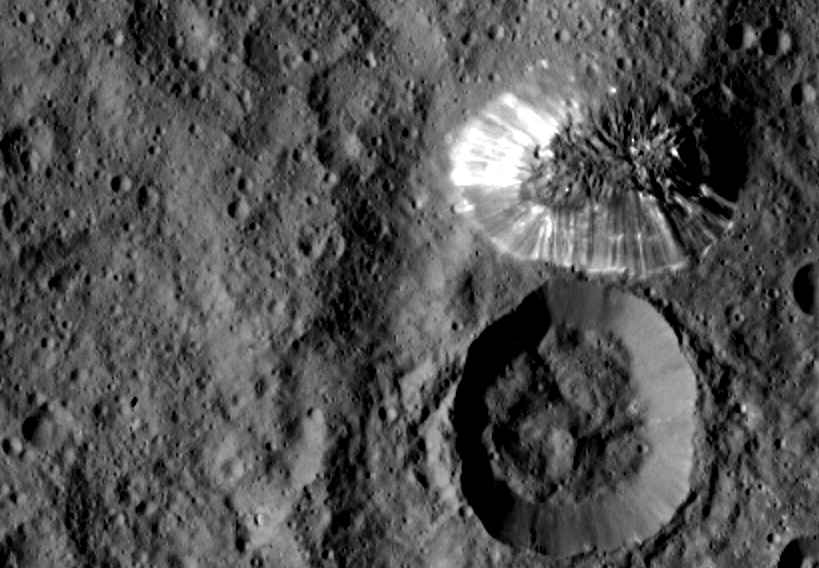 Today NASA released the latest image from Dawn, and in it we get a close up look at a mountain that has “almost no accumulated debris at the base of the brightly streaked slope,” according to the space agency. Each pixel in the image represents 450 ft; it was taken by the spacecraft on August 19.

Another mountain is near it with a similar shape, but the sides are dull, as are the sides of other nearby smaller mounds. NASA does not go into any further details about the image, nor the potential cause of the shiny edges. Whether this is located in the cluster of shiny spots or in a different regions isn’t clear.