NASA has had a spacecraft orbiting Mars called the Mars Reconnaissance Orbiter or MRO since March 10, 2006. The spacecraft has been circling the planet at about 2 miles per second and collecting daily science data about the planet’s surface and atmosphere. NASA has announced a milestone for the MRO that was reached this week.

The spacecraft has now orbited Mars 60,000 times with the magic number ticking by at 10:39 am PDT on May 15. MRO has taken some interesting images of the surface of Mars over the years using its HiRISE camera. Back in December 2018, the HiRISE camera snapped a picture of the InSight rover cruising its way across the surface of Mars.

HiRISE is a very powerful camera, the name stands for High Resolution Imaging Science Experiment. It is able to see surface features about the size of a dining room table from its orbital perch 186 miles above the surface of Mars. 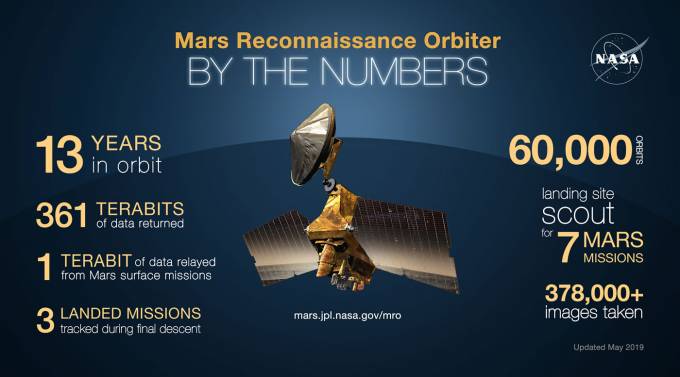 Other than taking high-resolution images, MRO also watches the daily weather on Mars while probing the surface for ice, providing data that can influence future missions. MRO also acts as a relay to send data from surface spacecraft back to Earth. NASA expects that the MRO will hit another milestone later this most when it passes 1 terabit of data sent to Earth. NASA says most of that data comes from the Curiosity rover.

MRO has been in orbit for 13 years and has tracked three mission during their final landing phases. The spacecraft has been used to scout for landing sites for seven Mars missions and has snapped over 378,000 images. MRO sends data back to Earth every day and it will be in place to keep an eye on the Mars 2020 rover when it lands.