One small step for James Webb, one giant leap for telescopes, or something like that. NASA has just proudly announced that the first of 18 mirrors has just been installed the soon to be completed James Webb Space Telescope. Just one mirror, you say. So what’s the big deal, you ask? Considering that just this one mirror can fit around seven mirrors from the Hubble Space Telescope and considering James Webb is set to replace dear old Hubble by 2018, that’s quite the milestone achievement indeed.

Already years in the making, this mirror installation marks the beginning of the final stage to completing the James Webb Space Telescope, a process they expect to be finished early next year. This would give NASA, as well as the European Space Agency (ESA) and the Canadian Space Agency, who are also partners in this international project, time to get everything in order before the telescope launches into space by 2018.

The lone mirror is itself already quite remarkable. It measures 4.2 feet (1.3 m) and weighs 88 lbs (40 kg). When all hexagon shaped mirrors are installed together, they reach a span of 21.3 ft (6.5 m). The mirrors are made up of a special “ultra lightweight” beyllium, a material chosen for its ability to operate at cryogenic temperatures. In the case of the James Webb, that means minus 406 and minus 343 degrees Fahrenheit. The mirrors also have a thin gold coating for reflecting infrared light. 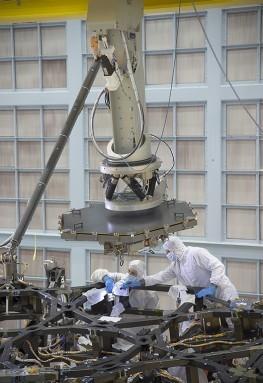 Installing the first mirror is one thing. Getting all 18 mirrors ready for operation is another. Like many such sophisticated instruments, precise positioning of the mirrors is critical. The telescope will be folded inside the rocket that will launch it into space, where it will then unfold and adjust to its final shape. They must remain precisely aligned after that however, with a margin of error no larger than 38 nanometers, or 1/1000th the diameter of a human hair.

The theoretical gains in knowledge that the James Webb might be able to bring far outweighs this painstaking process. The telescope will be used not only to look into space but also peer into our past. Like a time machine, scientists expect the James Webb to provide clues into the formation of the first stars, galaxies, and our own solar system, hopefully offering insights into other possible solar systems that may also be able to sustain life like ours. 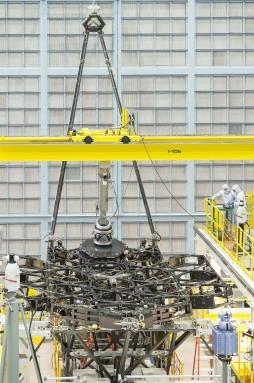