Every now again the team operating the Curiosity Mars rover that’s cruising the surface of the Red Planet stops to take the opportunity to do a little stargazing. When looking at the skies from Earth, we can often see Mars and other planets in the nighttime sky. Curiosity is able to do the same thing on the surface of Mars.

NASA recently released the image above that shows both Earth and Venus. The picture is actually a pair of images that were combined to show both planets at the same time. Curiosity captured the images using its Mast Camera about 75 minutes after sunset on Mars on June 5, 2020. The images were captured on the 2784th Martian day of the mission.

The two-image panorama reveals Earth in one frame and Venus and the other. Both of the planets are nothing more than pinpoints of light. Researchers say that due to the distance and dust in the air of Mars the planets typically look like very bright stars. As for why NASA snapped the photos, they were taken partly to gauge twilight brightness. The team says that during this time of year on Mars there’s more dust in the air to reflect sunlight making it particularly bright. 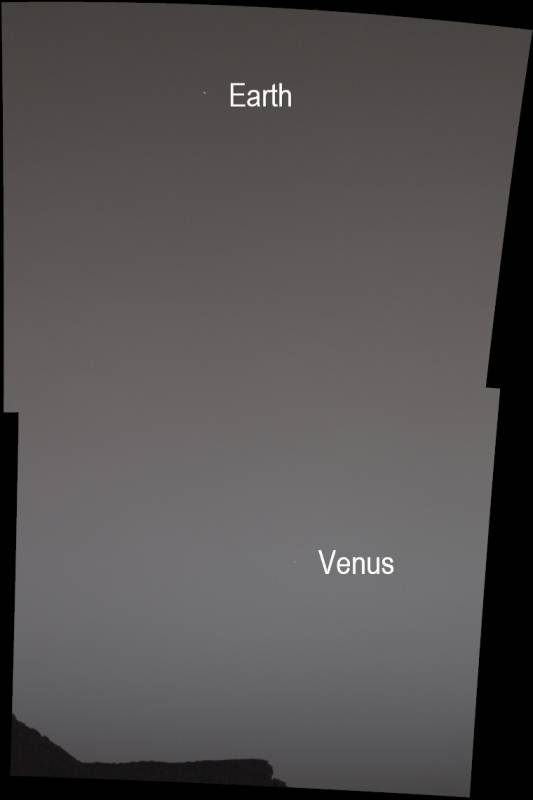 Scientists say that even moderately bright stars weren’t visible when this image of Venus was taken. The scientists point out that when Curiosity used the Mast Camera to take pictures of Earth and the moon in 2014 the color and brightness of the sky were significantly different from the current images because of the high-altitude dust in the Martian air currently.

As for the object that can be seen in the lower-left corner of the image, that is a feature of Mars called Tower Butte in the “clay-bearing unit” that Curiosity has been exploring for over year. The Curiosity Rover has been on Mars since 2012 and its mission is ongoing.