The various spacecraft have beamed images back to Earth of their vantage points from close to the sun. Each of the three missions has a distinctive orbit around the sun giving a different perspective from what we see on Earth and each other. The different perspectives are reflected in different views of the planets, showing planets in different positions than they would be seen from Earth.

Solar Orbiter looks towards Earth from a distance of about 155.7 million miles away using the Solar Orbiter Heliospheric Imager. On November 18, 2020, that instrument captured Venus, Earth, and Mars in the same frame. The Parker Solar Probe used its Wide-field Imager for Solar Probe to snap a couple of images capturing six of the solar system planets in one view.

The six planets include Mercury, Venus, Earth, Mars, Jupiter, and Saturn. The image was taken on June 7, 2020, using an instrument meant to take pictures of the solar corona and inner heliosphere in visible light. The spacecraft was approximately 11.6 million miles from the sun and about 98.3 million miles from the Earth when it took the image. 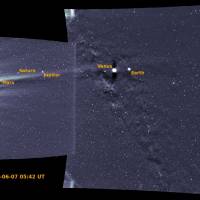 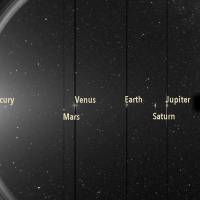 The NASA Solar and Terrestrial Relations Observatory is known as STEREO, captured a view of most planets in the solar system on June 7, 2020. The images were taken about the same time as the image taken by the Parker Solar Probe. However, STEREO’s image is a different perspective of the planets. All three images can be seen above.