On August 4, the city of Beirut experienced an enormous, incredibly tragic explosion that claimed numerous lives and caused widespread damage. Many videos of this event show the explosion from different angles, as well as the resulting impact, but it can be hard to comprehend the scope of the damage. Here to help with that is NASA, which has published a map showing the extent of damage caused by the Beirut explosion using satellite data.

The Beirut explosion started relatively small, involving a fire at a hangar that contained fireworks, which are visible in videos of the initial incident. However, a second — and quite massive — explosion occurred soon after, causing a mushroom cloud and shockwave that rapidly spread outward, claiming lives, causing injuries, and destroying structures.

Various monitoring systems registered the explosion as equivalent to a 3.3 to 4.5 magnitude earthquake. According to experts, this is one of the largest explosions to result from non-nuclear sources. To gauge the extent of the damage, NASA’s Advanced Rapid Imaging and Analysis (ARIA) team joined forces with the Earth Observatory of Singapore to generate a map of the damage. 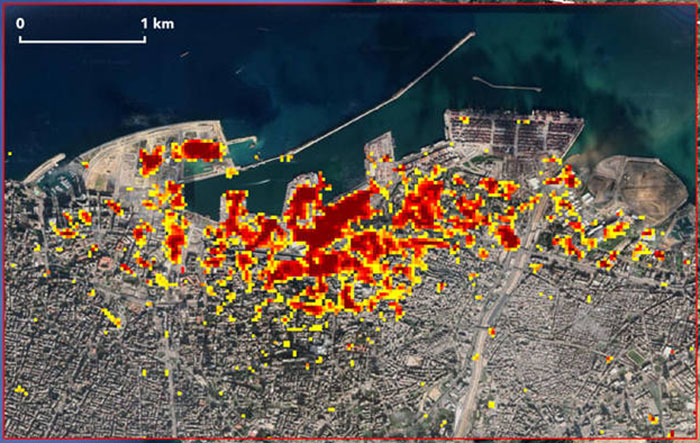 The render was created using data from satellites intended to observe ground changes that happen before and after some large event — usually earthquakes, but in this case, the explosion. As you likely guessed, the darker the red color in the map above, the more severe the damage is in those regions.

NASA says the map has a resolution of 33 yards per colored pixel. The outer yellow bands in the map show areas of ‘somewhat less damage,’ the space agency explains.

There’s an obvious benefit to generating such maps — in addition to helping visualize the extent of the destruction, the map also enables government agencies and support organizations zero in on the areas that need the most assistance, ultimately helping them prioritize resources for the most efficient outcome.