NASA finds ingredients for life in the deep ocean on Enceladus

NASA has announced the discovery of new organic compounds on Saturn’s moon Enceladus, the space agency announced on Wednesday. The finding was made in data that had been gathered during NASA’s Cassini mission, indicating that the deep ocean on Enceladus may contain the building blocks for life. That doesn’t mean life itself has been discovered on the moon, but it is a big milestone in the space agency’s investigation of the celestial body.

Enceladus is an icy moon with a snowy white surface covered in snaking blue tendrils. This particular body is the sixth-largest moon of Saturn; it’s only about one-tenth the size of Titan, the planet’s biggest moon. The layer of clean ice covering the moon’s surface makes it highly reflective, hiding a deep ocean that lies beneath. 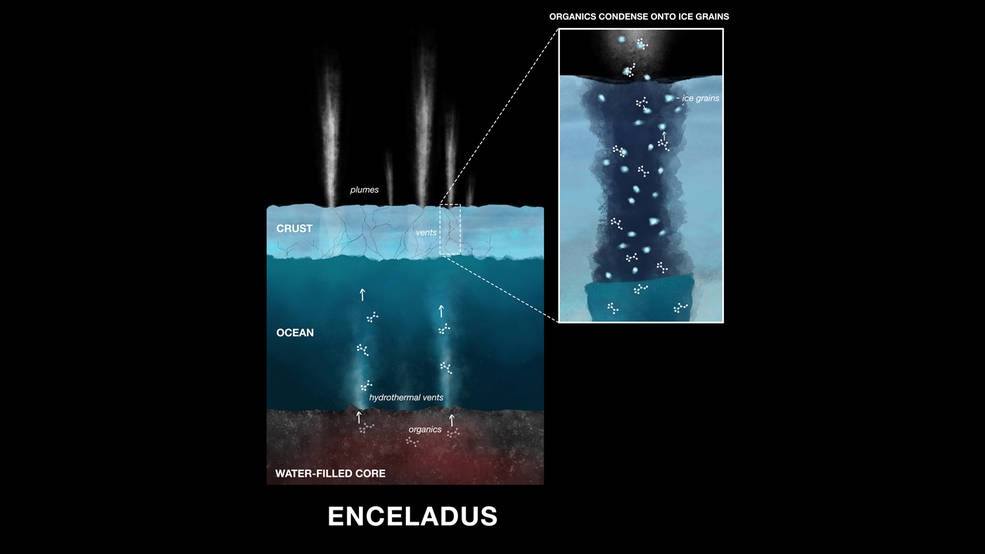 As NASA explains in the image above, Enceladus features a water-filled core that results in hydrothermal vents at the bottom of the moon’s deep ocean. These vents are powerful enough to eject icy material that ends up in space as small grains of ice and water vapor. It was within these ice grains that Cassini detected the new organic compounds.

The discovery involved ‘nitrogen- and oxygen-bearing compounds,’ according to NASA, the same compounds that — when present on Earth — result in the building blocks of life known as amino acids. It’s possible that the compounds could result in reactions in Enceladus’ ocean that produce amino acids, but that assumes the conditions are correct for these reactions.

Beyond that, researchers don’t yet know whether amino acids are even necessary for the development of life on other planets and moons, but the discovery is another piece of that puzzle. Though the Cassini mission ended in late 2017, its data continues to provide new information about the icy body.