NASA has presented both a phenomenon and an explanation of it, in this case floating hills spotted on Pluto. These hills are found on nitrogen ice glaciers, and they’re substantially large measuring in at one mile wide or greater. This is an aspect of Pluto’s geological activity, says the space station, and one it finds fascinating, as these floating hills themselves move in ways similar to icebergs on our own planet.

NASA says these hills are isolated from each other, and are possibly made of water ice fragments that broke off from the dwarf planet’s uplands. The ice hills can be found in the region on Pluto known as Sputnik Planum, the spot within that “heart” shape revealed in past NASA images. 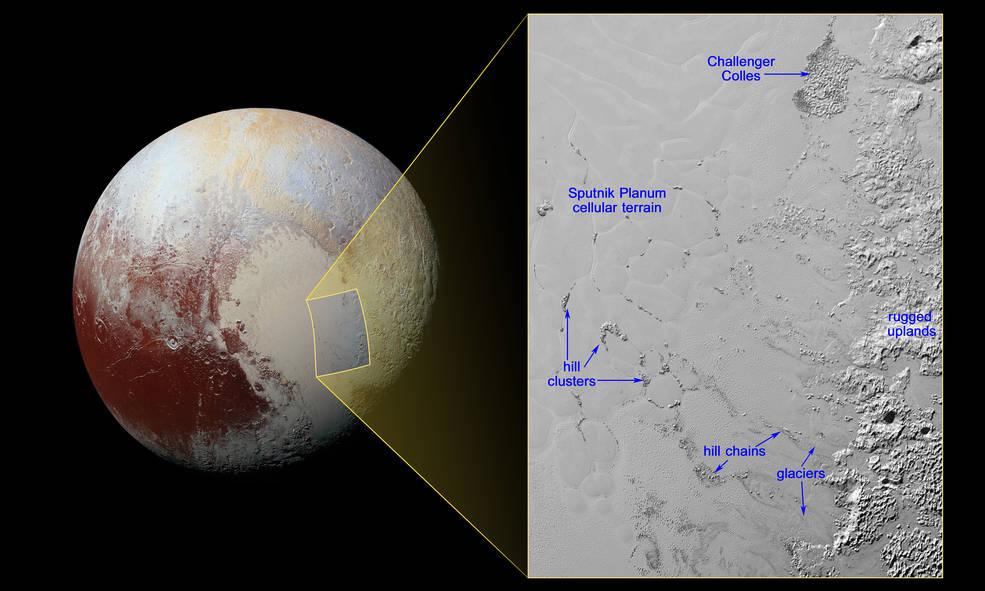 Researchers go on to explain that, at least as far as it can tell at this point, the hills are probably smaller version of Sputnik Planum’s larger western-oriented mountains. The explanation for how they’re floating is the most interesting part, though. Because water ice has a lower density than the nitrogen ice, they’re floating on top of the higher-density frozen landscape, slipping and floating around like icebergs.

When the ice hills break away from the larger mountains, they ‘float’ their way down into the heart-shaped region, forming chains of sorts and eventually end up in clusters. One particular cluster is 22 x 37 miles in size, showing how large they can end up. NASA has created the image above to represent this aspect of Pluto’s geological activity.