NASA DuAxel rover is two vehicles in one

NASA has designed an interesting new rover that’s made up of a pair of two-wheeled vehicles. The rover is called DuAxel, and the design is intended to allow it to descend crater sides and near-vertical clips on the Moon, Mars, and beyond. The rover can stop, lower its chassis, and anchor to the ground before splitting in two.

After the anchors are in place, the rover’s forward half unlocks and rolls way on a single axle. Connecting the rover’s two halves is a tether that unspools as the lead axle approaches the hazard and rappels down the slope. Once at the bottom of the slope, the axle uses instruments stowed in the wheel hubs to study a scientifically attractive location that would typically be out of reach.

NASA has tested DuAxel in the Mojave Desert with a small team of engineers from the NASA Jet Propulsion Laboratory. The tests were designed to check the rover’s versatility, and the team says DuAxel performed very well. The rover was able to operate entirely autonomously, deploying its instruments without needing a robotic arm.

The rationale behind creating a rover made of two single-axel rovers was to maximize versatility. The four-wheel configuration is ideal for driving great distances across rugged landscapes. The two-wheel version offers nimbleness that a larger rover lacks. 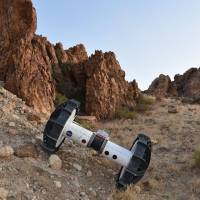 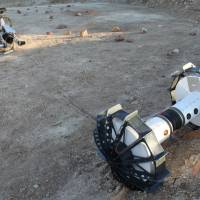 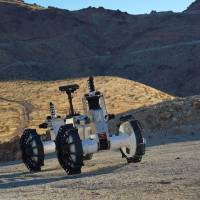 Scientists say that the design of DuAxel gives access to more extreme train on planetary bodies like the Moon, Mars, Mercury, and Europa. The effort is being put into being able to drop into craters and down cliff faces because here on Earth, those are some of the best places to study geology. Rocky outcrops have many layers of the past easily exposed. DuAxel is currently a technology demonstration and is waiting to be assigned to a destination. The team continues to improve the technology and design.