NASA has cameras monitoring the entire planet Earth, not to mention a few corners of the universe around us. Every so often the space agency catches something surprising on camera, usually in the form a bright flash or a streaking fireball. One of NASA’s cameras had a different sort of surprise for researchers, though, bringing a bit of creepiness just in time for Halloween.

In addition to the cameras it has in space — ones pointing both toward and away from our planet — NASA also has a number of cameras located on Earth pointing upward toward the sky. These cameras are designed to capture meteors as they streak across the sky, but sometimes it spies something else altogether.

The space agency has shared an image of a bug standing on one of its camera lens domes, giving the appearance of a gigantic insect in the sky. The critter isn’t the only creature to plant itself atop one of these domes. 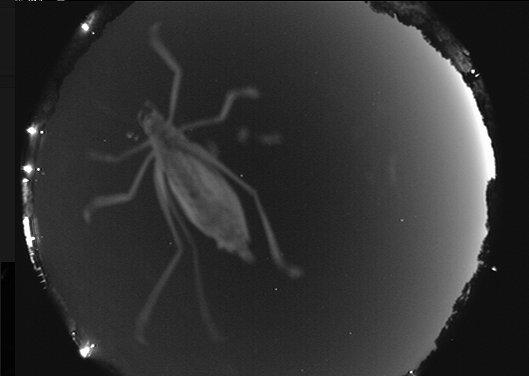 NASA also shared an image of an owl as viewed from below — it was snapped standing on the lens, its feet and talons visible with a looming owl head above. These camera domes have also snapped photos of spiders, bats, raccoons, and more, according to the space agency.

These cameras are specialized black and white video cameras with lenses that allow for a view of the whole night sky. We get data from the cameras that allows us to figure out where a specific fireball came from, how fast it is traveling, and if it could possibly survive to make it to the ground as a meteorite … Our cameras here at Marshall are located near a wooded area so it wasn’t surprising that we caught a few unusual visitors.

The space agency has published a selection of these images in honor of Halloween 2018.