NASA ran the “Send Your Name to Mars” campaign inviting people from around the world to submit their names to hitch a ride to Mars aboard the new Perseverance Rover. Nearly 11 million people submitted their names, and all the names were stenciled by an electron beam onto a trio of fingernail-sized silicon chips. Also stenciled on the chips were essays from 155 finalists in NASA’s “Name the Rover” contest.

Recently the chips were attached to an aluminum plate that was fitted to the Perseverance Mars Rover at Kennedy Space Center in Florida on March 16. The Rover is scheduled to launch this summer and will land at the Jezero Crater on February 18, 2021. Each of the three chips shares space on the anodized plate with a laser-inch graphic that depicts the Earth and Mars joined by the Sun.

NASA says that the simple illustration pays homage to “elegant line art” used on the plaques aboard the Pioneer spacecraft and the Golden records that were carried by Voyager 1 and Voyager 2. Perseverance has the plaque attached to the center of its aft crossbeam making the plate visible cameras on the mast of the Rover. 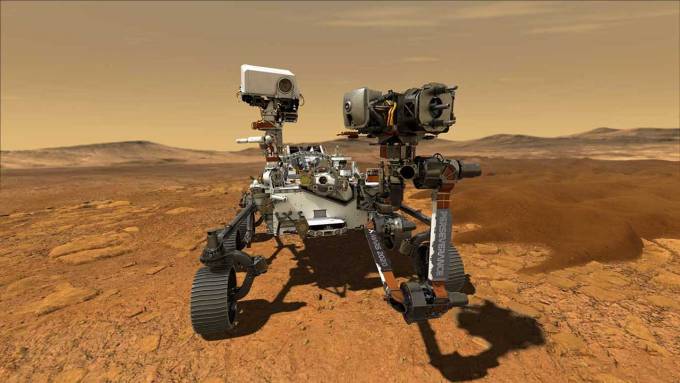 NASA says that currently, coronavirus won’t impact the Mars Perseverance Rover launch schedule. On March 21, the team began to reconfigure the Rover allowed to ride atop the Atlas V rocket during launch. The steps included the stowing of the robotic arm, lowering and locking in place the remote-sensing mast and high-gain antenna. The process also involved retracting the legs and wheels.

Perseverance is a very large Rover weighing slightly under 2300 pounds. The main goal of the Rover is to search for signs of past microbial life while working to characterize the climate and geology on Mars. The Rover will also collect samples for a future return to Earth and help scientists to pave the way for human exploration of Mars. The Rover is being built by JPL, a division of Caltech in Pasadena, California. JPL will also manage operations of the Rover for NASA.