The wings of aircraft today are complex systems with lots of moving flaps and components controlled by hydraulics or cables depending on the application. Researchers from NASA and MIT have shown off a new wing design that is flexible and able to change shape to control the flight. The team says that the new design could significantly boost aircraft production, flight, and improve maintenance efficiency.

The new wing design has been tested in a wind tunnel. Its design doesn’t rely on surfaces like ailerons to control roll and pitch like a conventional wing. Rather the whole wing, or just parts of it, deform by incorporating a mix of stiff and flexible components into its structure.

The tiny subassemblies bolt together to form an open and lightweight lattice framework that is them covered by a thin layer of a similar polymer material. The resulting wing is much lighter and more energy efficient than conventional wings made from metal or composites. The new wing structure is made of thousands of tiny triangles of matchstick-like struts and is made up of mostly empty space. 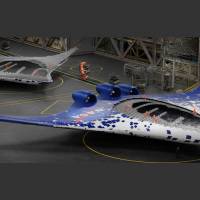 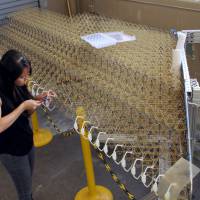 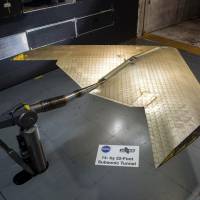 The result of the construction is a metamaterial with the structural stiffness of a rubber-like polymer and extreme lightness and low density of an aerogel. The team designed a wing that lacks motors and cables for deformation and uses a system that automatically responds to changes in aerodynamic loading. Essentially it is a self-adjusting wing-reconfiguration process for the different phases of flight.

The wing is able to match the shape to the loads at different angles of attack. That is done by careful design of the relative positions of struts with different amounts of flexibility allowing the wing to bend in areas in specific ways in response to particular stresses. The team is currently testing a wing that is comparable to the size of the wing in a single-seater aircraft.