Naim Mu-so and Mu-so Qb review: music to my ears

These days, the names of Harman Kardon and Bose are becoming more and more prevalent, especially in tech and in cars, but they are hardly the only trusted Hi-Fi names in the audio market. And while Sonos has had a good head start in the wireless Wi-Fi speaker market, it’s hardly the only game in town. And depending on your audio proclivities, it might not even be the best. Naim’s name holds just as much weight as the top players, especially in the UK, and while its first wireless system, the Mu-so, is almost two years old, it, together with the Mu-so Qb wireless speakers, remain one of the best sounding wireless audio systems money can buy.

Don’t let the odd sounding name put you off. Naim has been in the industry for decades, tracing back its humble beginnings to power amplifiers before rising to become one of the UK’s top hi-fi equipment manufacturers. And if you ever need proof of its quality and prestige, you need only look at its three Queen’s Awards for Enterprise and its partnership with Bentley, a name that is also synonymous with luxury in cars.

The Mu-so is Naim’s first entry into the then fledgling wireless speaker system industry, launched in the later parts of 2014. But less like most technologies and more like great wine, the Naim Mu-so’s excellence hasn’t become obsolete and has, in fact, aged gracefully. And even while the company has just recently launched its spiritual successor, the more compact Mu-so Qb, the Mu-so integrates perfectly with the newer hardware, a testament to the company’s forward thinking and strategic planning.

Just as good as its sounds

Wireless audio has received no small amount of flak for issues of quality and stability. So naturally, there was some apprehension when the Mu-so came out with a not so small price tag. Nonetheless, the wireless speaker proved naysayers and doubters wrong and delivered an audio quality unheard of, no pun intended, among its ilk.

Hands down, the Mu-so and Mu-so Qb are the best wireless speakers I’ve tested. Together, they’re pretty damn hard to beat with little compromises. Sound quality is rich, accurate from low frequencies up to heavy bass and treble. You get a sense of depth in whatever you happen to be listening to. Everything from Les Miserable to The Sound of Silence by Disturbed, and, yes, even TV sounds are utterly mind-blowing good. 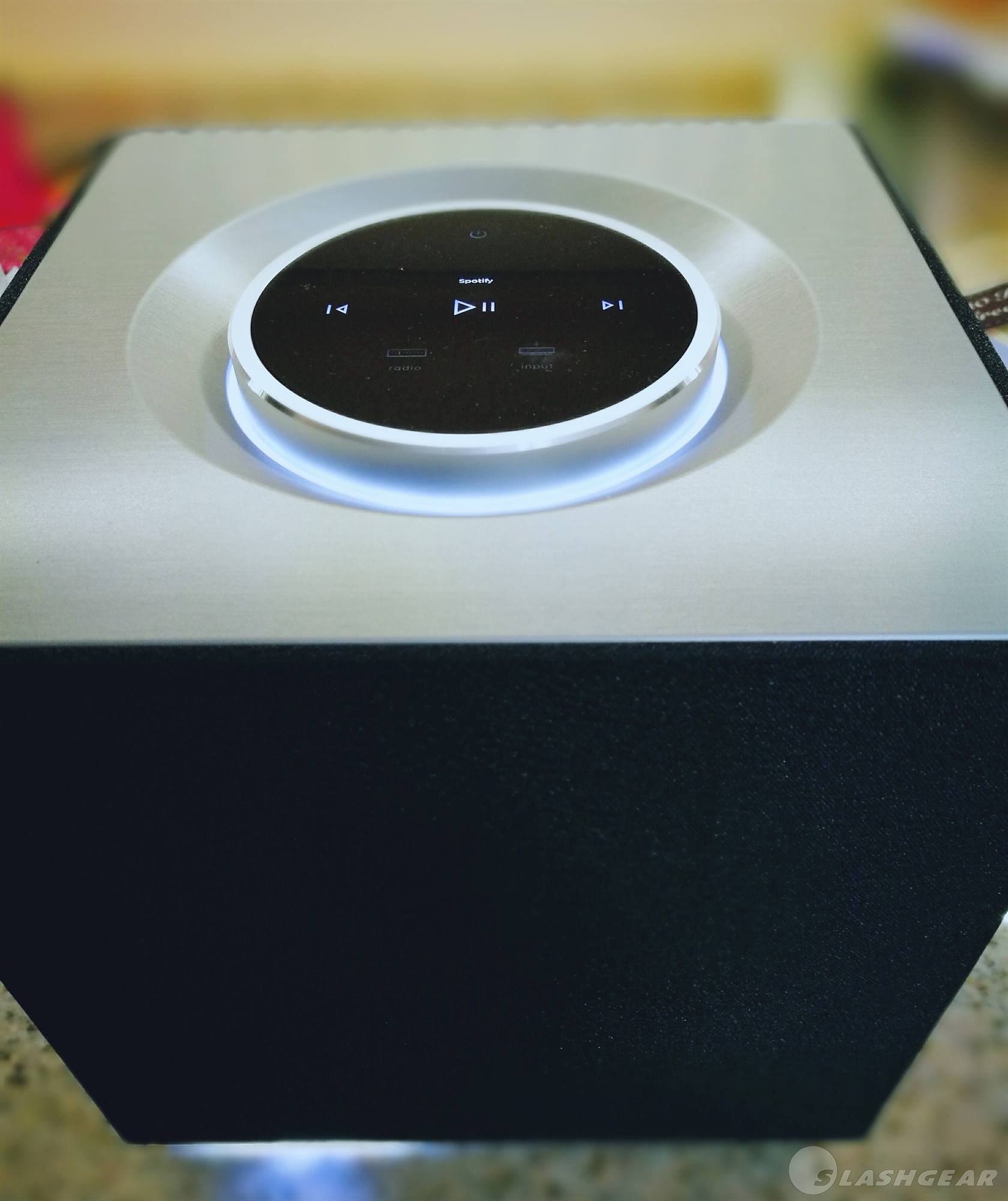 The Mu-so really shines when you pump up the volume. It manages to fill the room without making you feel like your eardrums are going to burst. Whereas other speakers trip up and fail to keep up, the Mu-so handles all types of music, at all levels, like a boss. You get none of the noise you’d hear with other audio systems at higher volumes, delivering bass that is full yet clear, though some might actually be put off by the thickness of it.

Albeit less than half in length, the Mu-so Qb is no less capable than its predecessor and larger partner. We were practically amazed at how powerful its output was for such a small speaker. Like the Mu-so itself, the bass is the Qb’s strong point though not exclusively. And like the Mu-so as well, the rich and thick yet clear bass coming from the smaller box might not be to everyone’s tastes. While the Qb does also fairly well on treble and mid-range, it does falter a bit on the latter. It didn’t have the same subtle gradation that the larger speaker offered, a limitation of physics more than anything. Still, for a speaker with as small cabinet as this, the Mu-so Qb easily blasts the competition away, especially when it came to the bass.

A work of art

Although Naim is known for the excellence of its audio equipment, it is equally known for its exquisite taste in design. The two speakers, which look quite similar except in size, are so damn elegant that they look more like pieces of modern art in the living room rather than speakers. That is, until you look closer and see the volume and control dial on top. 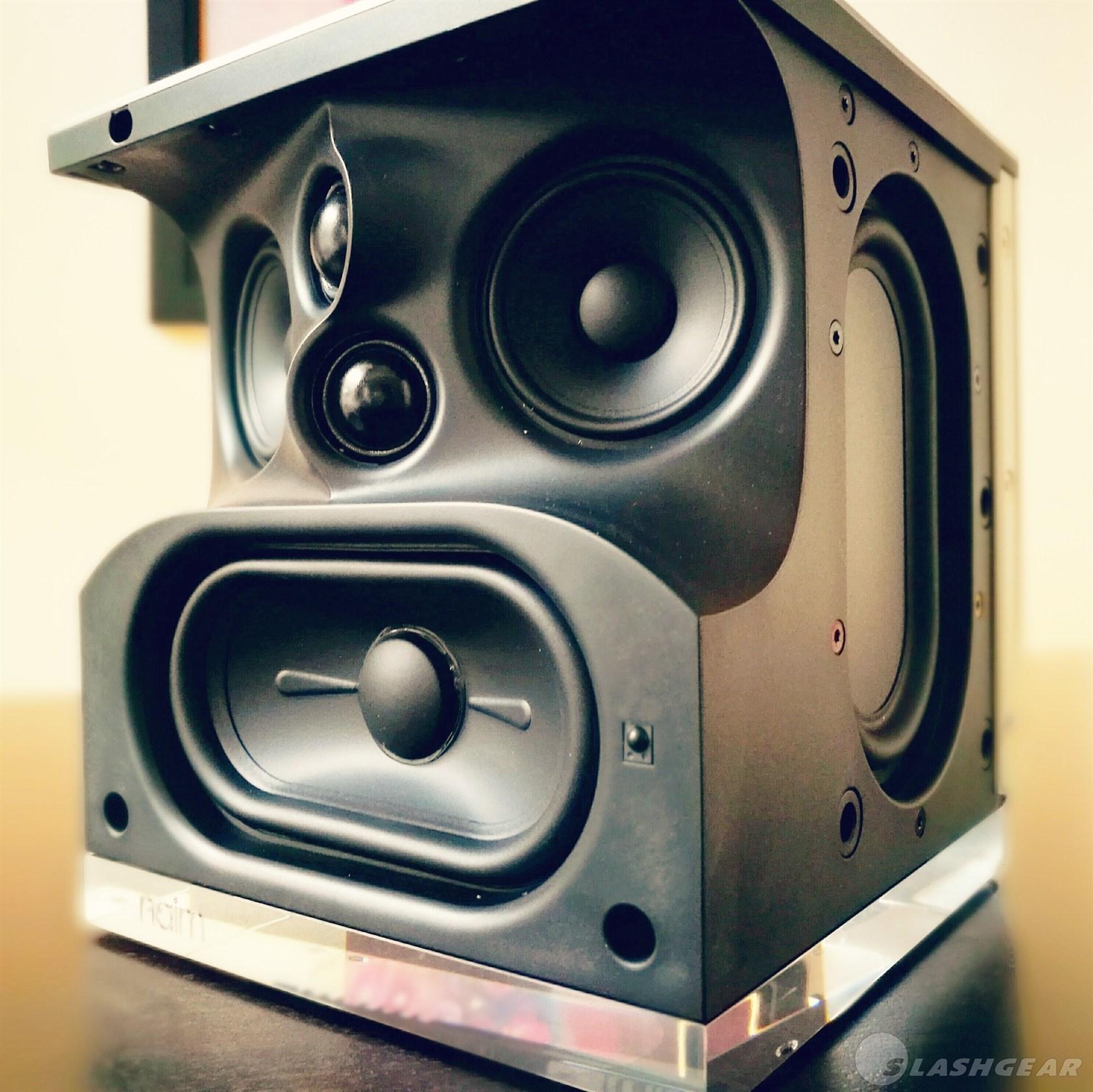 That in itself, however, is also a work of art. Unlike the traditional volume controls you’d see in most audio equipment, the Mu-so’s, and the Qb’s by extension, features a large dial with an illuminated display panel, rooted inside a carved section of the top surface. This is such an elegant design choice as well as timeless. Operating the dial is smooth and graceful, with the volume indicator light around the edge steadily increasing or decreasing, every notch fills the room ever-so rich with delight. 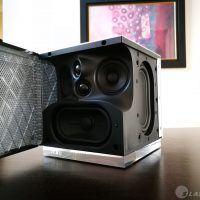 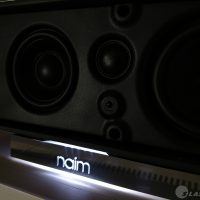 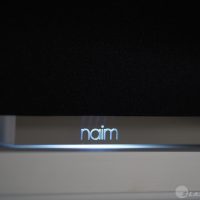 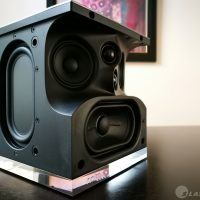 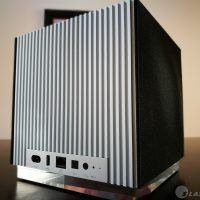 Everything about the dial design oozes premium from the smooth brush aluminum to the ambient light that’s so pleasing to the eyes. And everything down to the touch-sensitive keys on the display panel exudes simplicity to an extreme, and yet, at the same time, sacrifices neither functionality nor ease of use when switching between inputs. 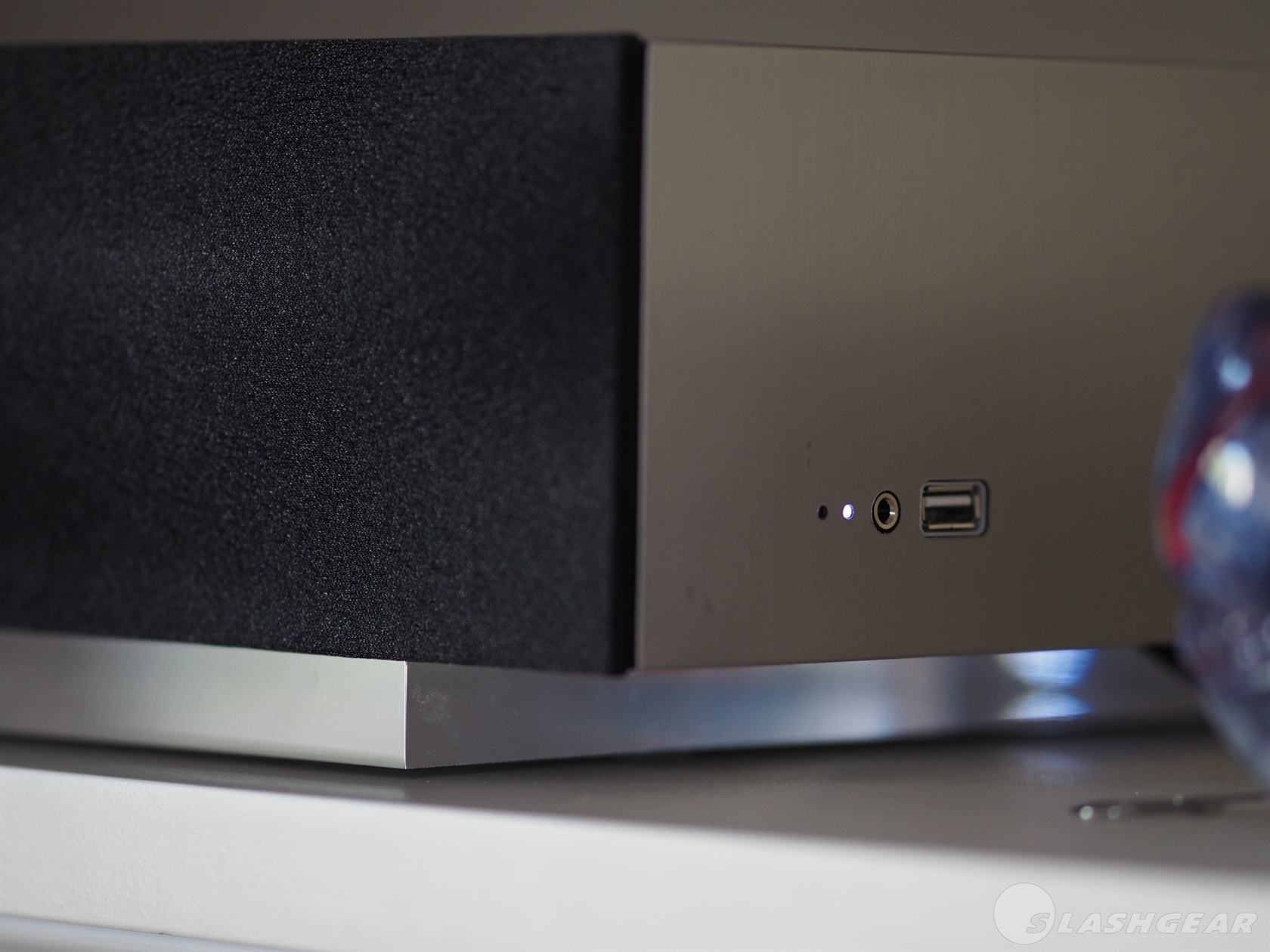 Those input sources, at least the wired ones, are all hidden, either to the side or at the back, out of sight and out of mind. On the Mu-so, USB port and a 3.5mm input jack are placed on the side, while the Ethernet port, optical digital audio input, as well as power cord plug are recessed under the belly of the unit.

The Mu-so Qb is like a smaller, cut-down version of the Mu-so. An 8-inch cube in place of a long rectangular box, the Qb bares the exact same design as its larger and older sibling, down to the same volume and controls dial. As for the ports, these are all located in a single row on the back side of the speaker.

Some might see this as unceremoniously shoving aside precious connectivity for the sake of beauty, but in the case of the Mu-so anyway, it’s all about connections made over the air.

When the Mu-so first landed almost two years ago, it was Naim’s sole entry into the wireless speaker market. Although designed to work flawlessly with other Mu-so speakers, the steep price may have prevented it from being utilized to that extent. Fast-forward two years later, the Mu-so Qb was born, giving audiophiles the chance, admittedly for a price, to setup their dream wireless home audio system.

It was almost as if Naim created the original Mu-so with the Qb in mind, seeing years into the future. That’s because the two work so well together they might as well have been launched together. A single Mu-so can pair with up to five Mu-so Qb’s set up all around the house for your listening pleasure. You can connect individually to each Qb or, if you’re in a party mode, sync up with all of them at the same time. And since the Mu-so Qb delivers near equal performance as the larger Mu-so, you’re assured of that same quality no matter where you are in the house. 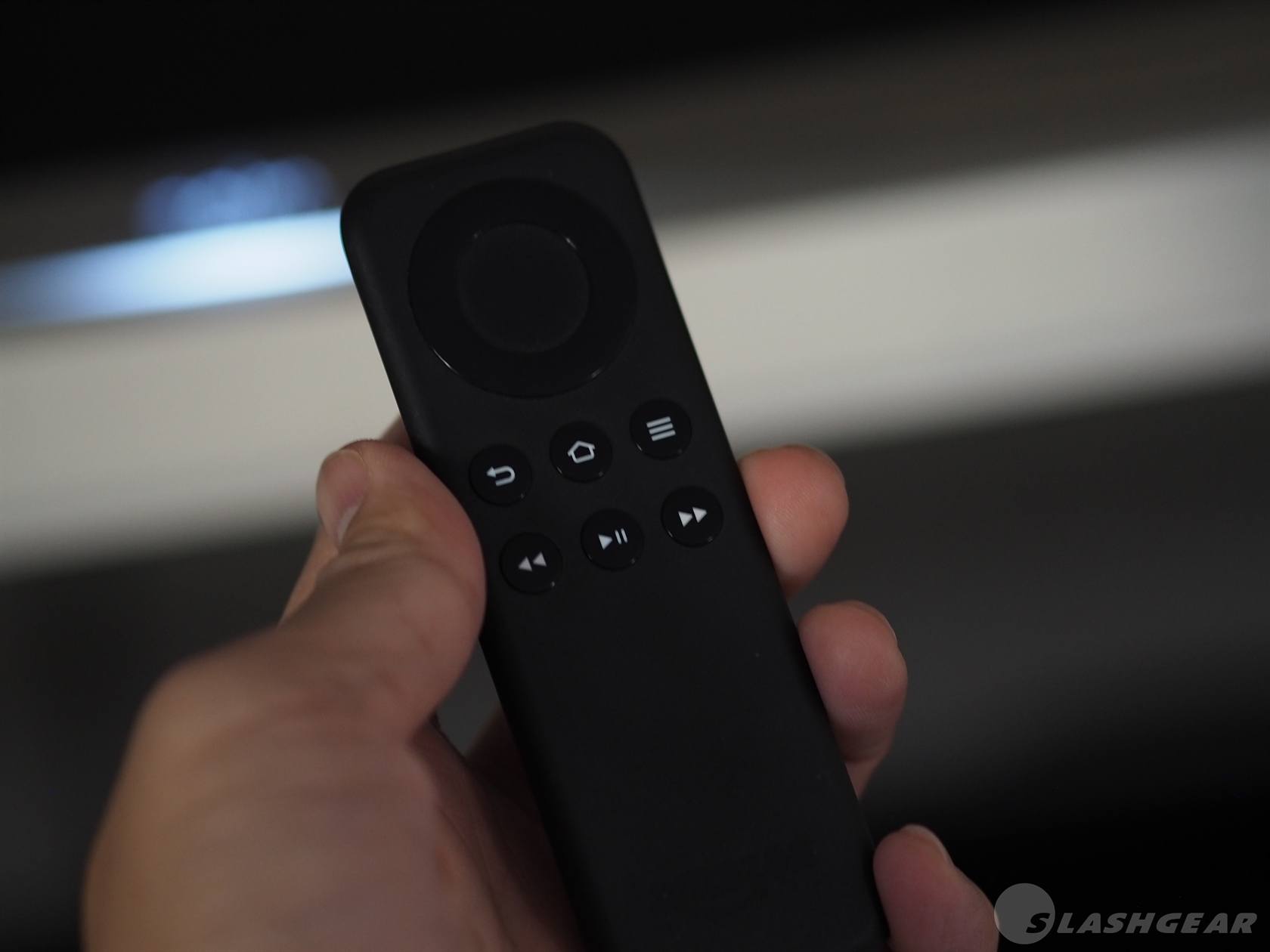 In addition to the wired connections mentioned above, the Mu-so supports wireless standards such as uPnP, AirPlay, Spotify Connect, and Bluetooth. The one proverbial wart in the Mu-so’s connectivity face is that it doesn’t do HDMI. Curiously, neither does the more recent Qb.

From the time I’ve spent with the Mu-so the sound quality is “music to my ears” – a gift that keeps on giving, even after years of being in the market and being challenged by newcomers almost every quarter. For something that has outstanding audio quality, a sleek design, and all the bells and whistle of a wireless speaker system, a higher price tag may not be surprising. Even so, some might find the $1,500 cost of the Mu-so, plus the near-$1,000 of a single Qb, to be prohibitively expensive. For a lover of sound, however, it may well be worth the price. 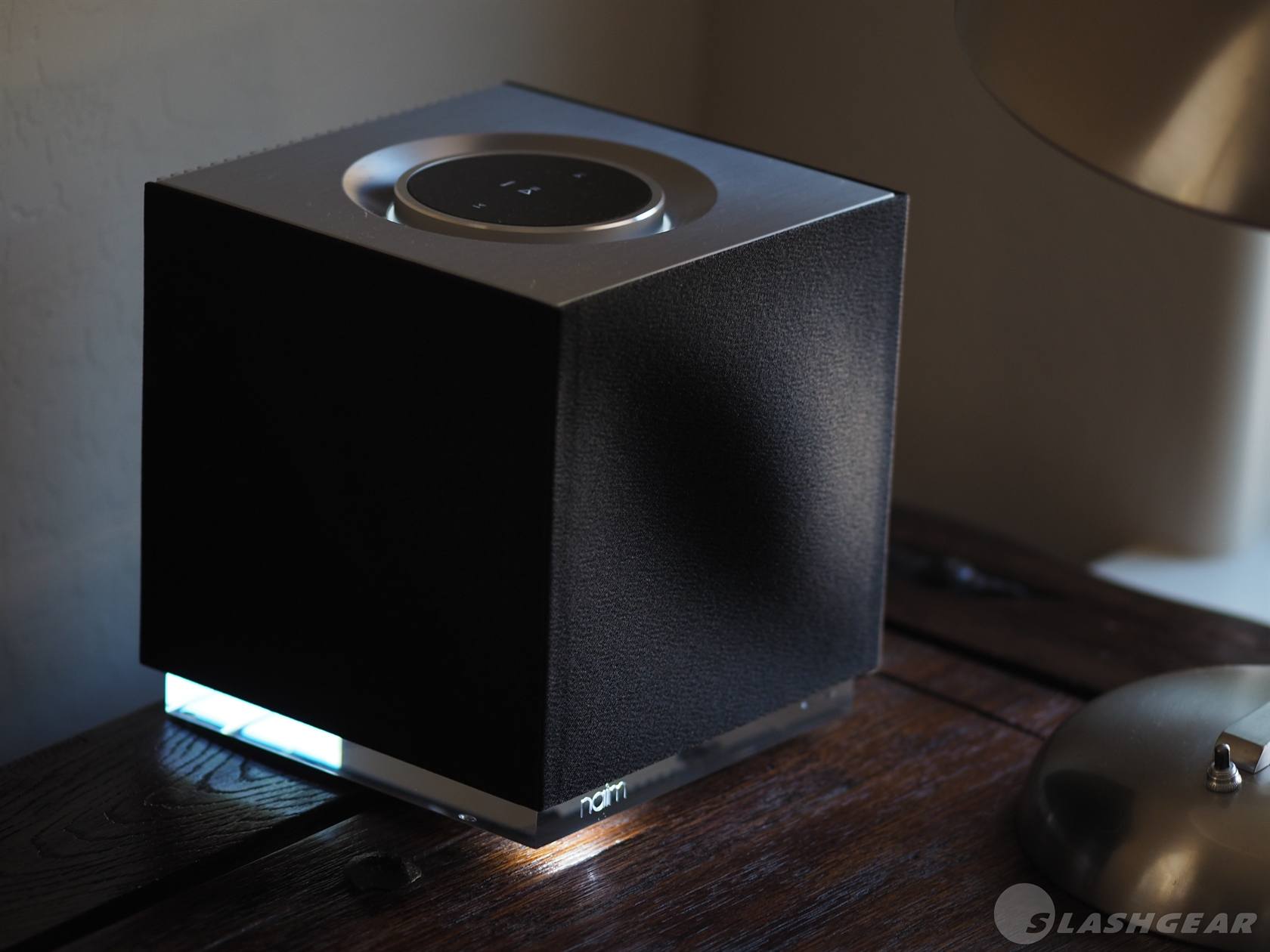 And the savings might even add up to make up for the costs. I usually find myself working at a Starbucks when I’m home, but ever since I’ve gotten Mu-su setup in the house, I have every reason to stay planted at home. 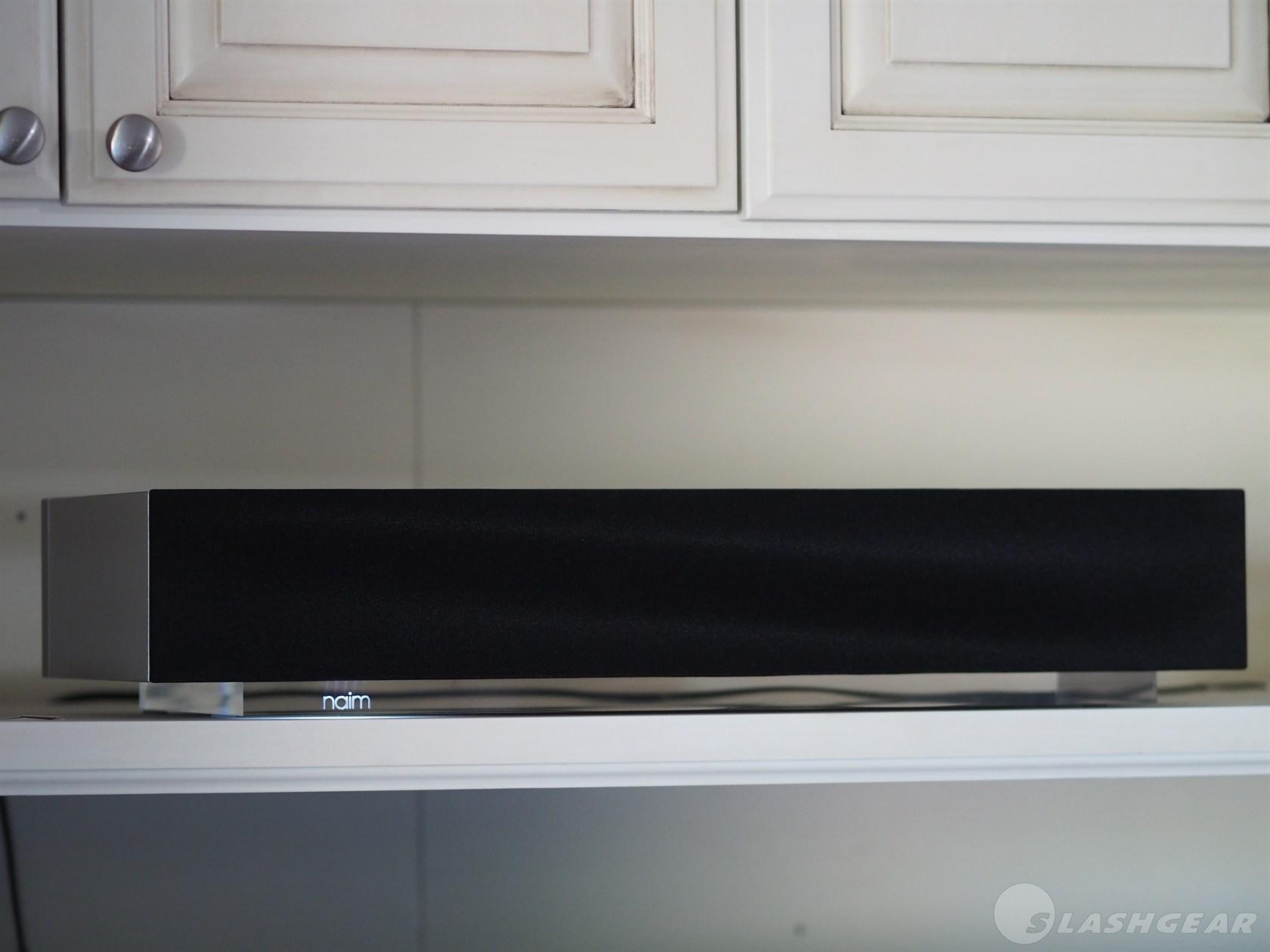