Microsoft CEO Satya Nadella‘s announcement last week didn’t exactly shake up the mobile industry as much as it shook confidence in its mobile, particularly smartphone, strategy or lack thereof. A lot of questions were raised and theories cooked up. Since then, Microsoft has reiterated in different corners that it is still committed to smartphones. How exactly, it hasn’t completely explained. ZDNet’s Mary Jo Foley was able to get some alone time with Nadella after he delivered his Worldwide Partners Conference keynote and asked the hard questions that many of us probably want to ask.

Microsoft has been sending some conflicting signals, saying one thing but doing the opposite. It is committed to mobile yet axed the very people driving its smartphone devices forward. That’s neither accidental nor schizophrenic. In Nadella’s vision, devices, even technology, only take second place. Smartphones, tablets, and even PCs exist only in service of the greater Microsoft mission, which Nadella has defined, or restated, as empowering users. Microsoft’s primary job then is developing the platform, not selling smartphones.

That’s not to say that it’s less interested in mobile. Although it might sound ironic, that mission actually makes it even more obsessed with it, but not from a device-selling perspective. Nadella wants Microsoft to be “present on every mobile endpoint.” That translates not just to having its apps on smartphones, which is what Microsoft-Android advocates are playing at. It means giving a Microsoft experience on mobile. It means One Drive, Office 365, Azure Active Directory, Microsoft Account. It means Windows 10.

Underlying all that is, naturally, Windows 10. The version that would run on smartphones is an instance of Windows 10 customized for that form factor. Heck, what runs on HoloLens is also Windows 10 with the Universal App Platform (UAP). Nadella doesn’t want to dwell too much on Windows 10 Mobile as something distinct like Windows Phone. After all, if you’re using a phone in Continuum mode with a full desktop interface and experience, does it still count as Windows mobile? 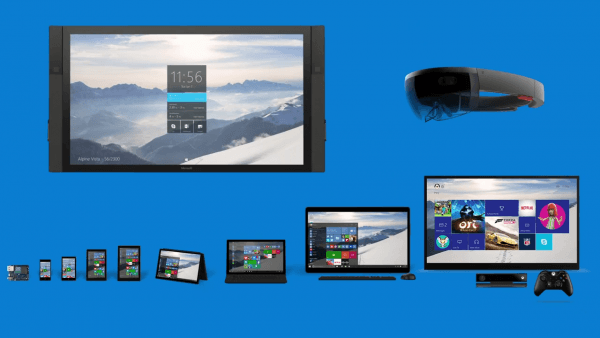 Microsoft isn’t bowing out of the smartphone market but Nadella has confirmed that its strategy for its own smartphones would resemble more the Surface than the previous Lumia lineup. And yes, it seems like they’re sticking to the Lumia name too. Even if no OEM builds a Windows phone, they will build it. As for the question of developers no longer interested in building Windows 10 Mobile apps, Nadella says that developers will write Windows 10 UAP apps because they want to write Windows apps. That they can also run on smartphones, tablets, Xboxes, HoloLenses, and maybe even Bands, only sweetens the pot.

In the end, for Nadella, it’s all abut the mission not being obsessed with a particular technology. He admits that it was a mistake to stick to a vision of the PC as the hub of everything forever. The tides are changing and Microsoft needs to adapt to it. And its answer to that is not a new technology or device but Windows 10. It’s a rather sane stance and admittedly more coherent that the disparate pieces and messages from previous management. But ideas are cheap, as they say, and execution is where Microsoft, and Nadella, will ultimately be judged.