Multiple Fortnite leaks hint at the return of ‘Kevin’ the cube

Multiple Fortnite leaks this week hint at the return of ‘Kevin,’ the giant glowing purple cube that eventually lifted Loot Lake into the sky before destroying it altogether. The battle royale game’s tenth season has brought old locations back to life, leading to speculation over whether the cube will rise again. A leaked loading screen and more all point toward that happening soon.

First up is a Japanese Twitter account focused on Fortnite leaks called @FNJPNews. Notorious game leaks account @HYPEX shared the following tweet with credit to FNJP, revealing the Loot Lake island featuring Kevin at the bottom and the lake house with a hotel sign at the top:

Soon after that leak was tweeted out, another notorious Fortnite leaks account called FortTory shared a video of the lake island on Twitter. The island is not located in the Volcano destination featured in the video; rather, that was just the best place the leaker could find for demonstrating the game assets.

A subsequent tweet was shared with images of both the island assets (house, etc), and a close-up shot of Kevin the cube stuck to the bottom of the island, imparting some of its purple power into the rocks.

Joining those screenshots is a video that includes the sound effects for the new Kevin and island assets — they, as expected, including wind and zapping noises:

Some sounds that the Cube makes pic.twitter.com/VeoHuL7doi

As you can tell from the leaks, the game assets don’t mirror the past Kevin-powered island that floated above Loot Lake, hinting at some sort of change to the general theme. That’s where a leaked loading screen comes in. FortniteIntel has shared an image that it claims is a leaked Fortnite loading screen that features a large solid island with Kevin at the bottom and a hotel on the top.

Here’s a cropped look at the island: 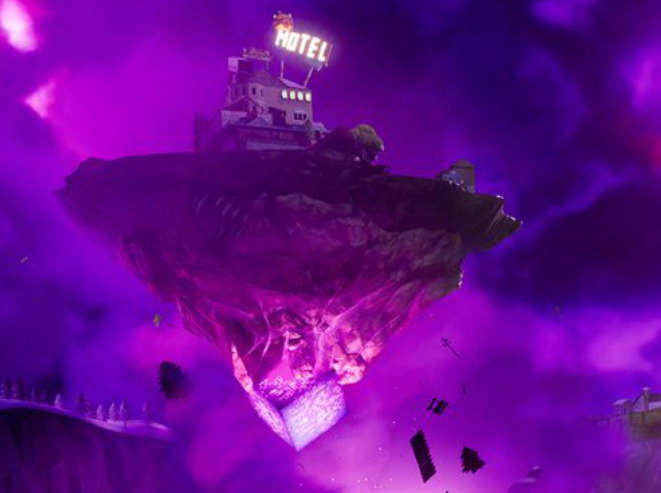