MQ-25 autonomous aircraft refuels another aircraft for the first time

The aerial refueling happened on a test flight on June 4. The MQ-25 T1 successfully extended its hose and drogue from its U.S. Navy-issued aerial refueling store and safely transferred jet fuel to the Super Hornet. Boeing says that the event was “history-making” and was a credit to the joint Boeing and Navy team working to deliver the MQ-25.

Boeing says during the initial part of the flight, the Super Hornet test pilot flew in close formation behind the MQ-25 to ensure that performance and stability required prior to refueling was available. The maneuver required the two aircraft to be as little as 20 feet apart while flying at operationally relevant speeds and altitudes. 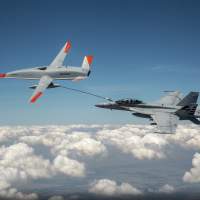 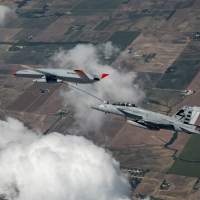 The aerial refueling milestone was achieved after 25 T1 flights testing the aircraft and aerial refueling store aerodynamics across the flight envelope. The system has performed extensive simulations of aerial refueling using MQ-25 digital models. The drone aircraft will continue flight testing and will eventually ship to Norfolk, Virginia, for deck handling trials aboard a U.S. Navy carrier later this year.

Eventually, Boeing’s MQ-25 will assume the refueling role currently performed by F/A-18s allowing better use of the combat strike fighters while helping to extend the range of the carrier air wing. It’s unclear at this time when the aircraft might be ready for actual deployment.