With Lenovo‘s admission of how it grossly underestimated the task of resucitating Motorola‘s brand, there might have been some fears that we might be seeing less and less Moto phones, especially on the lower tiers. Those fears, however, might be a bit unfounded, at least for now. In fact, Lenovo and Motorola might be coming up with not one but two mid-range models. The existence of a Moto G5 Plus has apparently been “confirmed” by a lone leaked photo, which hints at more details, some of which some Moto G fans might find a bit perplexing.

The size is one of the biggest questions, no pun intended. The protective cover on the smartphone, amusingly labeled the “Moto $$” notes a 5.2-inch Full HD screen. The Moto G4 Plus before it, however, boasted of a 5.5-inch Full HD panel. GSMArena theorizes that the shrinkage is intended to differentiate the Moto G5 Plus from the 5.5-inch Moto Z Play. And to make it clear that it won’t be compatible with Moto Mods.

Not that you’d be confused anyway, at least not if you look at the home button. Unlike the Moto G4 or even the Moto Z family, this supposed Moto G5 Plus adopts a more rectangular home button instead of the square one found on the older models. Again perhaps Moto intends this to be a visual mark to distinguish the Moto G line moving forward.

Other features indicated on that cover include a 2.0 GHz octa-core processor, a 12 megapixel “rapid focus” camera, a 3,000 Turbo Power battery, and, thankfully, a fingerprint scanner as well as an NFC chip. Not indicated but rumored is an FM radio and a TV tuner. 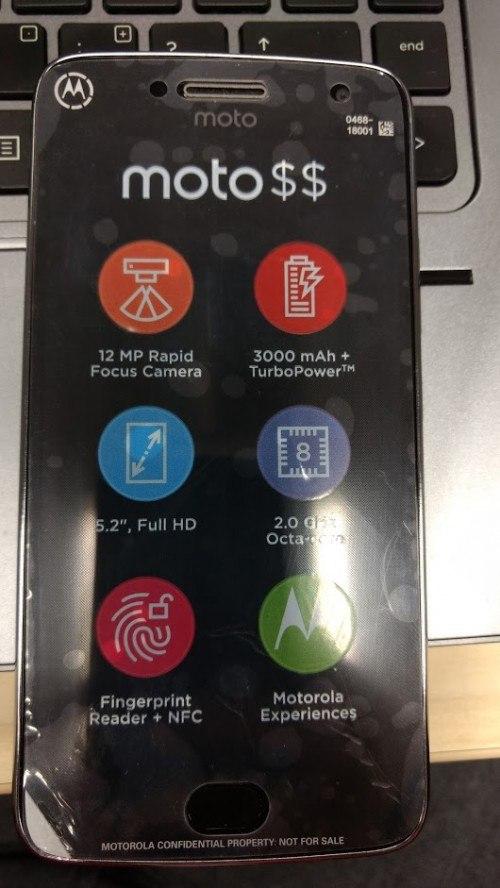 With MWC 2017 fast approaching, there is a high chance we’ll get to see the Moto G5 and G5 Plus later this month. It will also be interesting to see how Lenovo and Moto will position the Moto G line in light of recent setbacks in the smartphone business.