Every generation has its favorite gadgets — we’ve seen studies that indicate, for example, that the youngest television viewers prefer watching on their phone or tablet while their parents, more often than not, prefer a traditional television. A big study by the UK’s Ofcom recently dug deep into the data about gadget preferences and broke the information down by age, giving a side-by-side look at every age group and how those in them feel about their devices. It chose to do this by ranking devices based on which one each age group would miss the most.

The chart below reinforces quite a bit of what you’ve likely already observed: that teenagers and young 20-somethings prefer their smartphones most of all (or, at least, would miss them most if lost), that the oldest generation would most miss their television set, and that tablets aren’t really largely beloved by any age group. 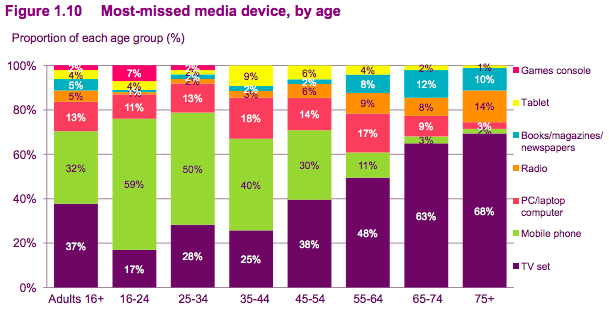 Less consistent were PCs/laptops, which seem most important to those aged 35 to 44, and 55 to 64. Radio mostly grows in preference as one works to the higher age groups, as do books/magazines/newspapers. Tablets are most preferred by the 35 to 44 age group. Game consoles, lastly, register highest with those aged 16 to 24, and disappear from the list completely in age groups over 44.

The study is massive, and looks at far more than just most-missed devices; if you have a general interest in tech and its influence in lives, age group preferences, and more, you can read the full report here (PDF).