This is already making my day. Mogi, or Mr. Grumbles depending on how formal you’re feeling, has been making “…blarg house music for house music blargspots”(sic) for an unspecified number of time-units. Anyway, yeah, this is perfect. It’s an hour-long re-cut of the original Tron set to a new Daft Punk-esque series of beats that is currently rocking my face. This is exactly what I needed to brighten my day. How can you have a frown on your face when you have lightcycles, giant evil tanks, the MCP, and phat beats?

I don’t really remember the original score to the original Tron, and I still haven’t seen the 2.0. I am no Tron expert or Tron fanatic telling you to watch this and enjoy because I love everything Tron. Really, I don’t like Tron much at all. Just between you and me, I hate Tron.

I like this in spite of it being Tron. j/k I’m ambivalent.

It’s cold up there in Ann Arbor where Mr Grumbles is a French / Disco House DJ. Keeping dancefloors stocked with sweaty gyrating bodies is his cap and trade. I really hope he has a Mr. Grumbles cap. Just so I could know for sure when I saw him that he was in-fact the man in fact. If you are so inclined to find more of his music after enjoying this he also has a Myspace page with some tracks up there for a listen. 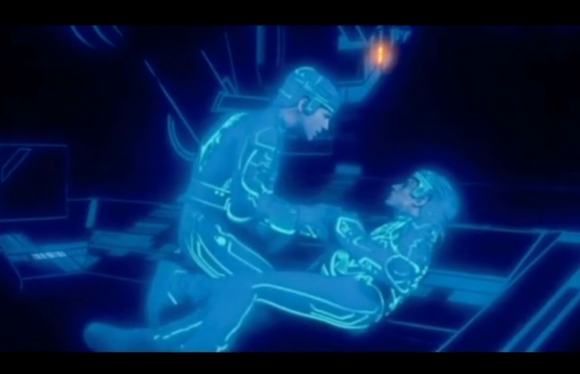 Now here’s the really cool part. This dude is just giving this thing away for donations. This video below is the entire recut and rescore, and it’s just up there on Vimeo waiting for you to enjoy. And hey! Mogi has a donation link posted up on moodgadget. Browse on over and throw him a bone!

End of Line is an original re-score of the movie Tron (1981), created by Ann Arbor native French / Disco House antihero Mogi Grumbles. End of Line is a 100% independent composition that lives wholly outside the original film score by Wendy Carlos and Annemarie Franklin.

The result of a live collaboration between Alex Taam and video editor Christian Silbereis, a re-cut of the film featuring the Mogi Grumbles re-score has been released as a companion piece for your viewing pleasure. End of Line is being released digitally as a name-your-price offering, with 100% of the proceeds going directly to the artist.