Microsoft‘s latest piece of hardware, the Surface tablet running Windows RT, has been placed on the surgery bed and was given a full dissection by the fellows over at iFixit. While they were able to tear it apart completely, it wasn’t an easy feat, and they came across some obstacles along the way.

The whole process begins with removing the rugged kickstand from the tablet, which is actually held in place by torx screws. Of course, there are a whopping 17 torx screws that hold the entire device together, but once those are out, you’ll be able to carefully take off the rear panel, which is only attached to the rest of device by a small ribbon cable. 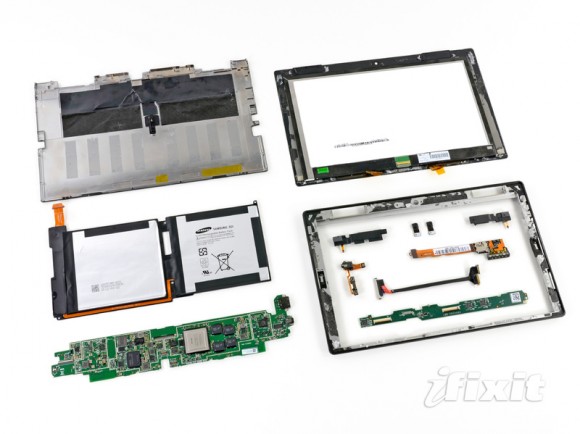 The battery is glued onto the rear panel, but it’s easier to remove than the iPad. Plus, all of the small components like the speakers, connectors, and ports come out fairly easily. However, some components, like the camera, couldn’t be removed until the motherboard was taken out. The top of motherboard obviously is home to the main circuitry like the CPU, graphics, and flash memory, but the bottom consists of the smaller features, like the WiFi antenna, the ambient light sensor, and a couple of microphones. Everything that deals with the touchscreen display is on a completely separate “daughterboard.”

Removing the display takes some work. It requires a heat gun, some guitar picks, and “plenty of patience.” Just like the iPad, the LCD and the glass are fused together and strongly adhered to the casing, making it a rough repair if the display breaks down. Overall, iFixit gave it a 4 out of 10 for repairability, which isn’t great, but it’s certainly not as bad as the third-gen iPad’s 2 out of 10 score.