Microsoft Research wants to use lasers to recharge phones

Wireless charging, with all its competing standards, has nothing on Microsoft Research’s rather ambitious idea. The research arm of the tech giant is looking for the most efficient and, at the same time, safest way to charge mobile devices without involving strangling cables and hugging walls. It’s answer? Lasers, not the destructive kind you see in fiction or medicine but light that carries energy, making our smartphones the functional equivalent of energy-gathering solar panels, except without the need to look for the sun every time you need a battery boost.

Wireless charging is no longer the stuff of science fiction, but it is far from becoming an ubiquitous replacement to cables. Aside from hurdles brought about by human factors, such as multiple standards, there are also some technical considerations to be overcome. Wireless charging is inherently dangerous to humans, so there must be a safe frequency and amount that must be observed. Wireless charging, as it is now, also transmits energy in a scattered manner, which is why current implementations require receivers to be at a certain maximum distance in order to take the full load.

That last part is one of the problems that Microsoft Research’s laser-based solution is trying to solve. Lasers travel in a straight line, unless redirected by lenses and mirrors, so that pretty much solves the direction problem. Instead of the wireless power receivers currently used today, this laser-based implementation will make use of photo-voltaic panels on devices, pretty much the same technology behind solar panels. An algorithm and detection mechanism ensures that the laser only shoots out it energy beams when needed and immediately turns off when blocked or when the smartphone no longer wants or needs energy. 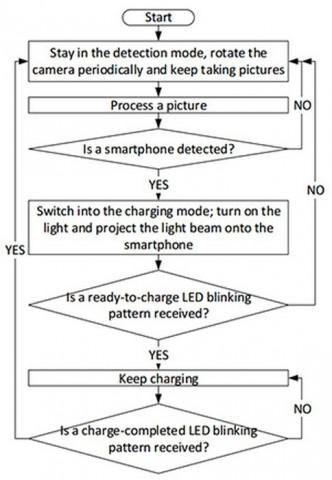 Alternatively, infra-red light can also be used instead of lasers, with less dramatic visual effects. Of course, the problem with this particular wireless charging solution is that it only exists as a prototype, without yet the real world testing that the likes of Qi and PMA already enjoy. Of course, that has never really stopped anyone from dreaming or from coming up with crazy ideas, and the laser-based wireless charging system might very well what the future needs.