Microsoft promising a free upgrade to Windows 10 for Windows 7 and 8.1 users is definitely a great thing, but it seems that Redmond still can’t its strategy pinned down. It once sent confusing messages regarding Windows 10 updates for those running on non-genuine (read: pirated) copies of the operating system. Now it’s muddling the waters again for their own testers, at first saying the Windows Insiders who have been testing Windows 10 will get the update for free, backtracking on that position, and then ambiguously confirming it again.

The one hard requirement for the free upgrade to Windows 10 was that the user should be running Windows 7 or Windows 8.1. This was later clarified to include only genuine copies to rule out pirates. This posed a problem for Windows Insiders who volunteer to test Windows 10. Since they would normally have to install fresh from a PC, it meant they don’t really have a genuine Windows 7/8.1 copy to upgrade from anymore once July 29 comes around.

Previously, Microsoft was silent on this predicament of their own testers, but last Friday, it finally said something. In essence, if the Windows Insider is coming from the preview build and using the same Microsoft account they used to register, they will get the final Windows 10 build and remain activated. Here is the original text:

As long as you are running an Insider Preview build and connected with the MSA you used to register, you will receive the Windows 10 final release build and remain activated. Once you have successfully installed this build and activated, you will also be able to clean install on that PC from final media if you want to start over fresh.

Well and good, except for the part where Microsoft silently modified its blog post to remove the emphasized parts above. Receiving the final form of Windows 10 is only half the story. Having it stay activated as a genuine copy is just as important. Of course, this caused more confusion than it sought to clarify, putting Windows Insiders again in no man’s land. Microsoft’s Gabe Aul, who wrote the post, later clarifies on Twitter that Insider will remain activated as long as they are running a preview build on the same registered MS account. 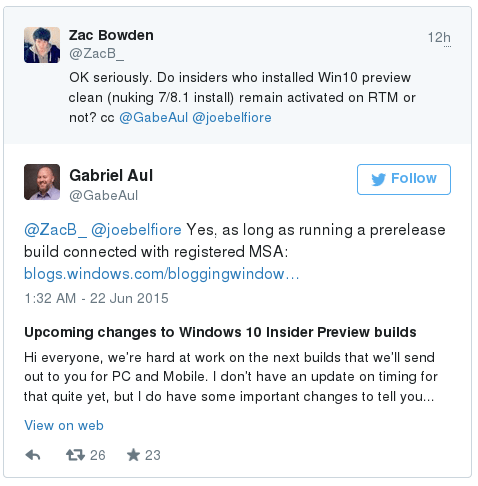 The flip-flopping was attributed to Microsoft’s attempt to move attention away from this particular corner use case, which could be open to abuse for those who want to get a free copy of Windows 10 without having to pay for a legit Windows 7 or 8.1. That said, the Internet can be an unforgiving place to send confusing messages, and it paints an image of a Microsoft that might be equally confused about its upgrade path.